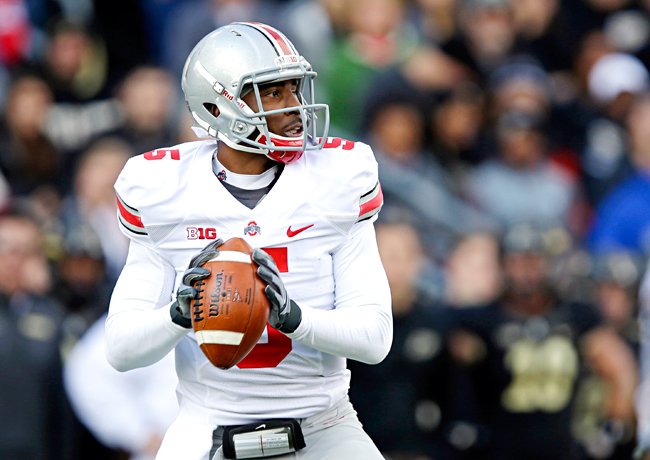 Texas’ victory last week over West Virginia wasn’t pretty, but it showed the team’s resilience. It showed how much heart this Longhorns team has. Unfortunately it also showed how many bum knees and Achilles tendons they have, too. Both running back Johnathan Gray and defensive tackle Chris Whaley, two leaders on the team, are out for the season. Despite that, I’m just not ready to bet against the Case McCoy magic yet. He continues to somehow find ways to pull out close games. Oklahoma State is 8-1, but they haven’t played any of the other big boys (Baylor, Oklahoma and, yes, Texas) in the Big 12 yet. It won’t be easy, but the Longhorns can pull off the upset at home.

Lock of the Week

Thanks to Florida State and Alabama, the undefeated Buckeyes are currently on the outside of the national championship picture looking in and that means they have an incentive to run up the score. In their last two games they have done just that, beating Penn State, 63-14, and Purdue, 56-0. Illinois has yet to win a Big 10 game and lost at home to Michigan State by 39 points three weeks ago. The Fighting Illini are ripe for the picking and Ohio State head coach Urban Meyer isn’t above inflating the margin of victory to impress the pollsters and computers that decide who plays in the big game. Thirty-three is a big point spread, but the Buckeyes are fully capable of covering and have every reason to try and do so.

Teddy Bridgewater is a fantastic player, but the excitement surrounding his NFL prospects have caused his Louisville team to become overrated. This spread is way too high. The Cardinals only won by 14 points against Kentucky and Rutgers. They beat a winless Connecticut team by just 21 points last week. Houston is a sneaky good club. Their only losses are on the road against Central Florida, who beat Louisville on the Cardinals’ home turf, and at home by one point to BYU. The Cougars also demolished the same Rutgers squad that Louisville struggled against. Houston has a chance to pull off the upset outright, but even if they don’t, they definitely should at least come within 16 points.