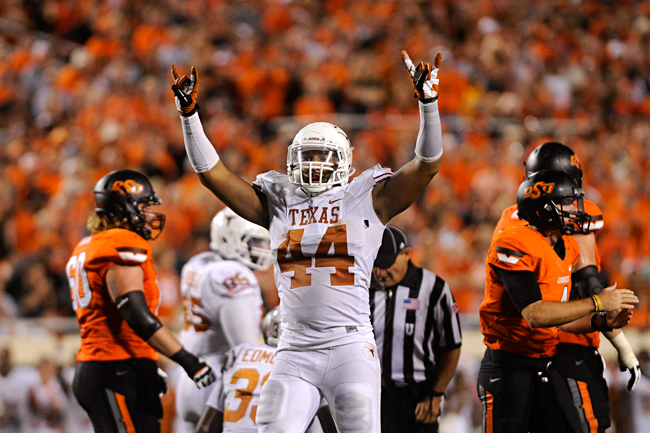 Without question, there are many games on Texas’ schedule each year that are must-see events.

While Oklahoma and the Red River Rivalry come in at the top of that list, many ignore the other team in the Sooner State. In the past few years, Oklahoma State has turned into one of the more anticipated games in the season and this year’s contest fits right into that category.

“I know the past few years there’s always been great games against OSU,” sophomore fullback Alex De La Torre said. “Last [few] came down to the very end and it has just become quite the rivalry. Same thing with really all the Big 12 games.”

Texas has won 13 of its last 15 meetings with the Cowboys. Overall it holds a 23-4 edge over their northern neighbors, with three of those losses coming in Austin. Last season, the matchup became a thriller when David Ash led his team in a late-game drive to take the eventual win.

In addition to the thrillers that have risen in the past few years, the Cowboys are composed of many native Texans. On their roster, 71 players are from the state of Texas, which adds bragging rights to this weekend’s game.

“It’s two of the three top teams in the league right now,” head coach Mack Brown said. “Also the fact that Oklahoma usually has so many Texas kids but Oklahoma State usually has more. And everyone says, ‘Why do we get behind Oklahoma State so many [times]?’ and I think its cause they’re exciting games, especially when they come down here they want to show momma how they can play in Austin. And me.”

While there may be special circumstances surrounding this game, the Longhorns aren’t entering this weekend any differently.

“You play so many teams from Texas in the Big 12 so its kind of like playing another team from Texas,” senior defensive end Jackson Jeffcoat said. “They want to beat us. Everyone wants to beat us. That is just how the Big 12 is. Everyone is very competitive with each other. Its just going to be an exciting game and were excited for them to come in here.”

There may not be a distinct rivalry between the Cowboys and Longhorns yet, but this game will still feel like one. Texas has three more games on its schedule that it needs to close out before it can celebrate and Big 12 championship and the seniors on this team have that one goal in mind.

“It would mean a lot for those guys [seniors],” junior defensive back Quandre Diggs said. “They got the opportunity to beat them last year.  It’s not like they haven’t beat them, but they’ve got two more home games.  We want to close out strong for those guys because those guys have done a lot for this program.”