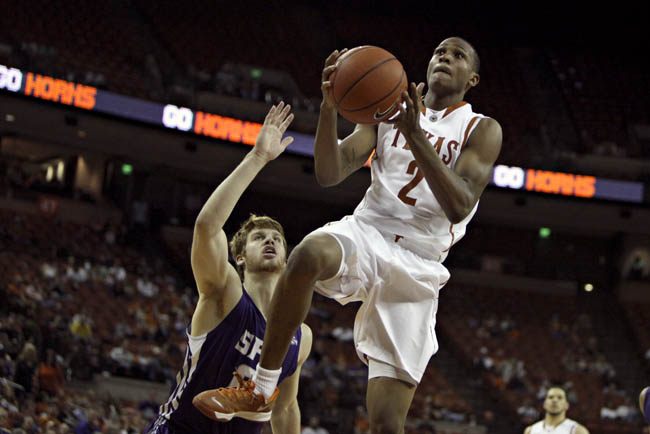 Stephen F. Austin is known as the Father of Texas, and on Friday, the capital city bearing his name held a blow-by-blow clash featuring the school bearing his name sake and the University of Texas.

The battle wasn’t historic, but for the third-straight game, the Longhorns endured after being locked in a tight contest. Texas’ youthful group — the 345th most experienced team in the nation according to kenpom.com — proved resilient, sparking a 12-2 run over the last 2:37 to fuel a 72-62 victory. The win placed Texas at 3-0 to begin the season for the first time in the last three years.

“It’s good for us to have games like this and show that we have adversity,” freshman point guard Isaiah Taylor said. “It shows we have the ability to fight back and finish games.”

Sophomore shooting guard Demarcus Holland posted a career high 21 points, resulting in a different Longhorn leading the team in scoring in each of its games.

“He’s been the most valuable player we got,” head coach Rick Barnes said. “He keeps doing the little things, filling up the stat sheet. He plays harder than anyone on the team.”

The decisive run of the game came with just under two minutes left. After a missed jump shot by sophomore guard Javan Felix, junior forward Jonathan Holmes leaped over a pair of Lumberjacks for a put-back slam, and a two-point Texas lead. After a pair of missed SFA shots, Holland made a quick outlet pass to Taylor, who made a crafty cross over to reach the basket, finishing with a left-handed scoop around his man.

The Longhorns’ size proved advantageous, as it did all night, on the defensive end, as a Holmes swatted a Lumberjack layup attempt off the backboard. Texas extended its lead to six on the next possession and never surrendered it after that point.

The Longhorns’ main advantage came on the boards, outrebounding SFA 40-26. This created a number of second-chance opportunities for Texas in the second half and wore down a smaller Lumberjacks roster.

Texas, once again, endured an outstanding shooting performance on the outside from its opponent. The Lumberjacks converted 11-of-24 three-point attempts, following the lead of the Longhorns’ first two opponents, Mercer and South Alabama, which each knocked down more than 40 percent of their long-range shots.

“We still haven’t run the way we wanted to run,” Barnes said.