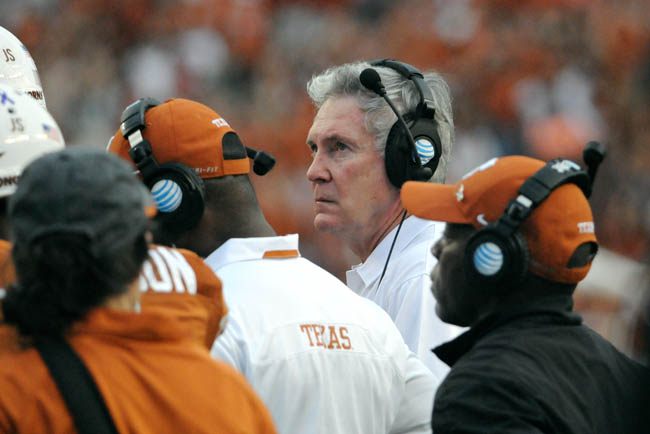 Fans scurried to the exits at the end of the third quarter as though the cloudy sky would momentarily release its frustration on the masses.

But the weather remained stable.

It was a moment rich in irony and particularly representative of the Longhorns’ season. Texas had reeled off six straight wins to place them back into the Big 12 title hunt. But if the way the Longhorns performed Saturday is any indication, that hope — and the fans’ belief — is fleeting.

“The atmosphere here was dead,” sophomore defensive tackle Malcom Brown said. “In the third quarter, you look up and [see] gaps in the stands. [You’ve] got to wonder what people are thinking. That’s how you can tell who’s on the bandwagon or not.”

Texas-Oklahoma State was one of the most consequential games at Darrell K. Royal-Texas Memorial Stadium since the older McCoy roamed the sidelines in Austin. But the beacon of hope Texas presented during its streak didn’t matter much to fans.

They showed up late, left early and the decibel level in the stadium failed to roar, topping out at a mere snarl from a wounded animal.

But perhaps that’s the situation Texas faithful have been placed in. Years of 10-win seasons and BCS success spoiled the fan base. Now, after four years of apathetic results, they don’t believe anymore. Fewer than 100,000 people attended Saturday’s game, failing to procure a sellout for the biggest game of the season.

It’s hard to chastise the fans for that lack of faith. The Longhorns, part of one of the most prominent programs in the country, have slipped under the leadership of head coach Mack Brown.

Brown led Texas to soaring highs in his first 12 seasons, but the team’s 29-19 record over the past four campaigns placed a damper on any buzz around the program.

The lull affects players, students, recruiting and the overall health of Texas athletics — which is still the most financially lucrative in college sports. But money no longer purchases success.

Brown still believes in his team’s chances — his glossy eyes and hoarse voice after Saturday’s game made that clear. Brown also brushes off the rumors about his job like a winter swirl would the last leaves of fall.

But the winds of change in Austin continue to blow. New men’s head athletic director Steve Patterson made a number of alterations at Arizona State when he arrived a little less than two years ago, and he wasn’t hired in Austin to allow the old regime to continue producing mediocre results. Patterson will want to install his own people.

A Big 12 championship — the outside shot the Longhorns have at it — may extend Brown’s tenure by a year. But that’s no longer certain.

The fans have given up and despite the team’s string of success, the bandwagon remains empty. But their support is always transitory. This team may still rally, but at this point — no matter the outcome — this looks like Brown’s last hurrah.