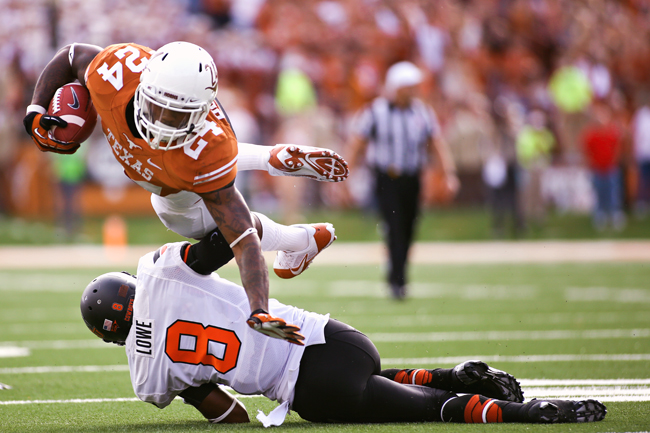 The Longhorns’ 38-13 loss to No. 12 Oklahoma State ended their six-game winning streak and complicated their run toward a Big 12 title. Here are four takeaways from Saturday’s game:

Struggle against the QB run

The Texas defense reverted back to its early season form against Oklahoma State, though, surrendering 95 yards and two touchdowns on the ground to senior quarterback Clint Chelf.

The quarterback racked up five carries of 10 yards or more, three of which came in a first quarter scoring drive that ended with Chelf running it in from 18 yards out. His 95 rushing yards and 9.5 yards per carry led all players and left a sour taste in defensive coordinator Greg Robinson’s mouth.

Disappearance of the pass rush

A major factor in Texas’ struggles against Chelf was its inability to generate pressure in the backfield.

After racking up 24 sacks in their first six conference games, the Longhorns failed to record a sack for the first time since the start of Big 12 play.

“They were blocking with most of their guys,” Jeffcoat said. “They’d bring the fullback in the back and block with him or they’d get it out pretty quick. Seven-man protection. They were getting it out fast.”

Texas remained devoted to the run in its first game without sophomore running back Johnathan Gray, but it failed to continue its recent efficiency on the ground.

One bright spot on the ground was junior running back Joe Bergeron, who racked up 49 yards on a season-high 10 carries. Bergeron accounted for Texas’ longest run of the game with his 21-yard effort in the second quarter.

After hauling in just seven passes for 190 yards in his last four games, senior wide receiver Mike Davis bounced back Saturday with his best performance since Week 2.

Davis led Texas with nine receptions for 112 yards, and his 41-yard grab was Texas’ longest offensive play of the game. He was the only player on the Longhorns to account for more than 50 yards through the air.

Following Saturday’s big performance, Davis now leads the Longhorns with 589 receiving yards and is second on the team with 42 receptions.