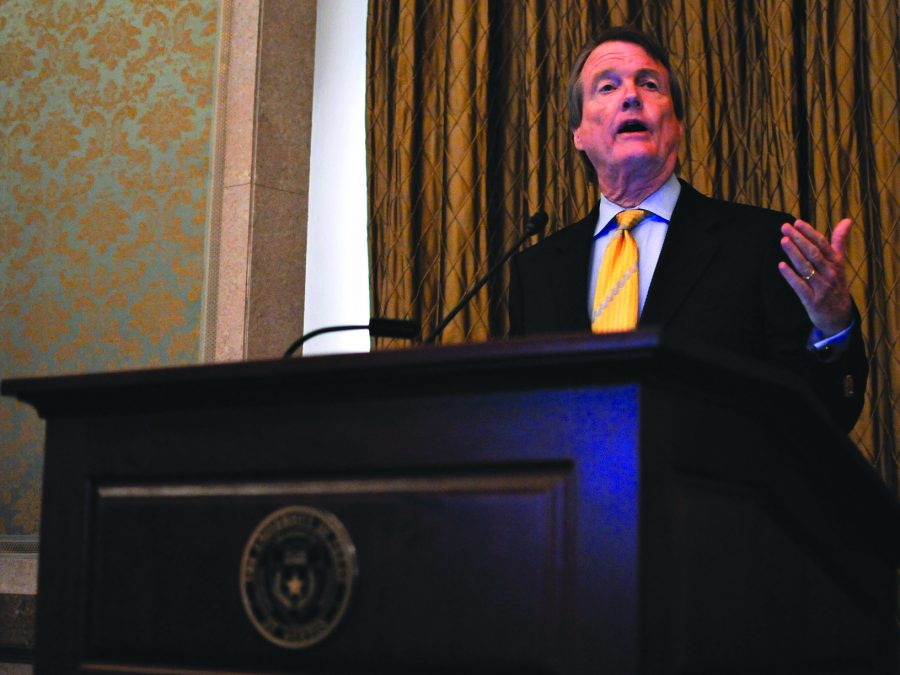 The Faculty Council approved an update to the core curriculum course list for the 2014-2016 undergraduate catalog and discussed the Fisher v. Texas case and land development plans at its meeting Monday.

All undergraduate students will continue to take 42 hours of required core curriculum, with specific course changes within select areas of study. The list of proposed changes to the course list will be applied in the 2014-2016 Undergraduate Catalog. The core curriculum courses are re-evaluated every two years.

Brent Iverson, dean of the School of Undergraduate Studies, said the core curriculum is updated and maintained largely as a result of efforts made by the Faculty Council.

“In a restricted environment, like we are now, one can imagine that there might be a natural tendency to pull away from the core curriculum,” Iverson said. “Moving into the future, I am anticipating that I will require your support once again to make sure that these advances continue to move forward.”

President William Powers Jr. spoke at the meeting about the Fisher v. Texas case argued in front of the 5th Circuit Court of Appeals last week. Powers said he supported the Supreme Court’s decision to uphold the principles determined in Grutter v. Bollinger, a 2003 case that established the constitutionality of affirmative action.

“We’re very gratified that the Supreme Court did not change that, but reaffirmed the principles of Grutter,” Powers said. “The 5th Circuit had its argument early last week — I was there. Our lawyers who argued the Grutter case, I thought, did an extremely good job of articulating our position.”

Powers also commented on the master development of about 109 acres of land near the J.J. Pickle Research Campus to be used for “commercial development purposes” approved by the UT System’s Board of Regents at its meeting Thursday.

Powers said the University requested the board’s approval for leasing the land — located at the corner of West Braker Lane and the North MoPac Expressway — to Hines, a Houston-based real estate company selected to develop the land.

“When the Pickle tract first came to the University, I think it was federal land that got deeded over to the University, even the part to the east of MoPac well outstretched our projections well into the future of what we would need,” Powers said. “I think this is clearly in the interests of the University.”

Hegarty said the University will spend the next several months negotiating an agreement with Hines, but it would take a minimum of 10 years to fully develop the land.

“In the end, it would be commercial office buildings with probably some upscale residential apartments and some restaurants to support the people that live there as well as support the office traffic that you’ll have,” Hegarty said. “What we hope is that the people that will want to come in and inhabit those buildings will, in many cases, have companion interest to the kind of research that happens on the Pickle tract.”