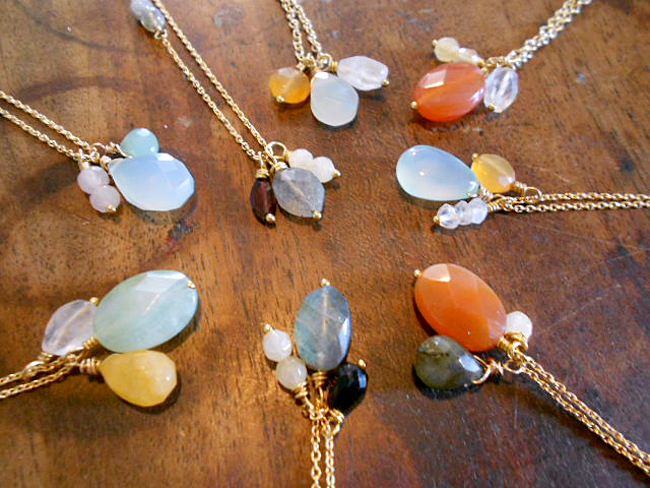 Rose Anderson left Austin for the West Texas desert of Marfa, all for the sake of her art.

“When I moved here, I made a very deliberate choice to pack my glue gun and screen printing machine and my collaging stuff, because that’s what I wanted my life to be when I moved to Marfa,” Anderson said. “I want to spend my time creating stuff.”

This Thursday the Blanton Museum Shop will host a trunk show of Anderson’s line, Jewelry by Rose.

“It’s a great way for the store to bring in more of an artist than we normally would,” Blanton Museum Shop manager Justin O’Connor said. “[It’s] not often you get to shop and meet the person who creates what you’re buying.”

Anderson said her jewelry is meant to be simple yet beautiful. It incorporates the use of stones, coral and beads placed on thin gold and silver chains.

The materials guide Anderson in the creation process.

“Sometimes your plan gets changed because of the technical things with the materials,” Anderson said. “Instead of seeing it as a road block, it’s more like an organic process because it helps to direct and shape what you are able to do.”

Anderson made the decision to isolate herself to fuel innovation and artistry.

“There’s all these limitations that come out of where we live, but that also pushes creativity in a way because if you can’t have access to [something] then, OK, how do you get around that, or deal with it or live without it?” Anderson said.

Marfa’s landscape and environment have attracted a variety of artists, making the city a hot spot for art in Texas.

“It is a place that really attracts creative people, and that is really good for the creative process because what we see all around us is large open spaces and mountains and open roads,” Anderson said. “There’s a lot of space for your mind to think here because you’re not clustered.”

Before moving to Marfa, Anderson made jewelry as a hobby. After exploring different elements of design and modes of art, she decided to design jewelry full time.

“A couple years after being here, I was getting back into making jewelry again,” Anderson said. “I always come back to jewelry. So I just thought, you know what, I should really pursue this more.”

As a long-time friend and former co-worker, O’Connor has watched Anderson grow as an artist.

“It has been fun seeing her evolve, because when she first started, she was kind of doing bags and things like that, but she was always really drawn to jewelry,” O’Connor said.

Anderson hopes to expand upon her jewelry line by opening a shop to sell the work of other local artists. She attempted this through her shop Velvet Antler, but it closed this past July because of issues with the building’s lease.

“Building this [brand] to where it is actually a means of income is a really beautiful challenge,” Anderson said. “To say, ‘This is what I’m excited about, this is what I’m doing. How do I go that step further where it’s not a hobby?’ You do take it more seriously.”