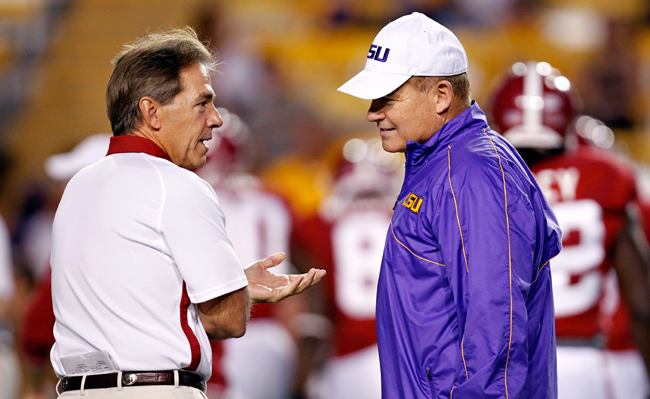 SEC head coaches, such as Alabama's Nick Saban and LSU's Les Miles, often talk about how difficult it is to compete in the SEC.

What I’m about to say might be considered sacrilegious in the college football world, at least in the southeastern part.

For the past decade, the Southeastern Conference has been considered the best conference in college football, and with good reason. It has won the last seven Bowl Championship Series games, and each year multiple teams from the SEC finish in the top 10 of the BCS rankings.

In recent years, though, the name of the SEC has taken over the talent, and the conference has simply become overrated.

The SEC has figured out how to fool the system — only lose in-conference games, and any decent team can finish 9-3 or even 10-2.

Take, for example, LSU. The Tigers have three losses, and they are still ranked at No. 22 in the BCS. Their wins are against teams that include Kent State, University of Alabama at Birmingham, Furman and Florida, which currently has a 4-6 record.

And look at Missouri and Texas A&M, two teams that were mediocre at best during their stints in the Big 12. In their first year in the SEC, the Aggies took down defending national champion Alabama and produced a Heisman-winning quarterback. Missouri, after a year of getting used to its new conference, now sits atop the East division in the SEC.

Both teams have a combined 17-3 record so far this season. Georgia and South Carolina, who came into the season ranked No. 5 and No. 6, respectively, are now a combined 14-6.

The SEC has also been known as a defensive conference while the Big 12 was strictly an offensive powerhouse. In the past, the SEC didn’t have the high caliber offenses it has now. Put Johnny Manziel, A.J. McCarron and other talented quarterbacks into the mix, and those defenses begin to fall apart, which is what we’re starting to see.

The Big 12 used to be loaded with NFL quality quarterbacks like Vince Young, Ryan Tannehill and Robert Griffin III, who exposed weak defenses. Now that the caliber has gone down, Big 12 defenses are beginning to resemble those SEC defenses.

The SEC is still one of the best conferences in college football; its resume proves that. Nevertheless, over the past few years, fans and computers have started to like the name of the SEC instead of the actual teams.