Texas’ struggles with the QB draw described as unacceptable 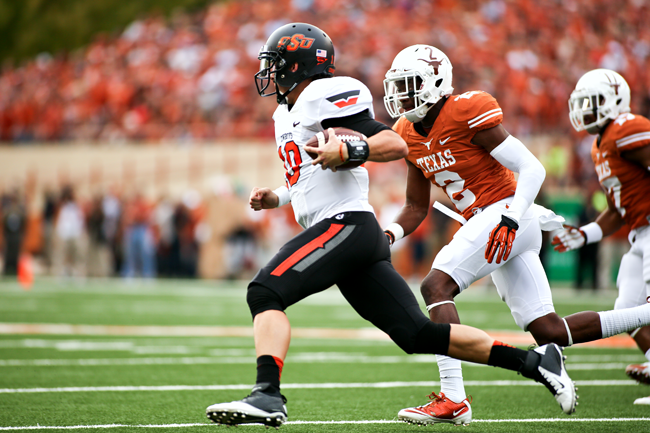 Oklahoma State's Clint Chelf brought Texas fans flashbacks to its early season loss to BYU when Taysom Hill ran all over the Longhorns. Texas' defense has improved significantly since then but continues to struggle to stop the quaterback option.

If there was one thing Texas wanted to forget about this season, it was its defensive woes against BYU and its quarterback Taysom Hill.

The Longhorns gave up 550 rushing yards against the Cougars with 259 of those coming from the sophomore quarterback. On Saturday afternoon, Texas had flashbacks to that woeful game, as Oklahoma State’s quarterback, Clint Chelf, took off against the Longhorns in another contest Texas would like to forget about.

Chelf tallied 95 yards on the ground against the shattered Texas defense. The senior grabbed two rushing touchdowns while adding 197 yards passing and two touchdowns through the air. Chelf accounted for all but three of the Cowboys’ points.

“Clint managed the game really well and continues to be a nifty runner for us,” Oklahoma State head coach Mike Gundy said. “We didn’t need to use him as a runner as much in the second half, so we didn’t. He plays pretty good from start to finish. I’m proud of him — the way he’s developing and leading our team on offense — and he stepped up to lead our offense at this time.”

Texas allowed multiple gaps to open up in the middle of the field, which allowed running room for Chelf. Robinson explained that his linebackers are responsible for making the call to close up gaps, but those calls were never made.

“We did a very poor job inside with gap control on the quarterback draw a couple times early that just killed us, and then they scored a run for about 20 yards with the same thing,” head coach Mack Brown said. “We did a better job with that after, but then they hurt us more on the option. It seemed like every time we get something going, we killed ourselves.”

The Longhorns were unable to apply pressure on Chelf, and with the open gaps, let him go untouched into the Texas backfield.

“They were blocking with most of their guys,” senior defensive end Jackson Jeffcoat said. “They’d bring the fullback in the back and block with him or they’d get it out pretty quick … When they got up, they didn’t throw the ball much.”

Texas played lights-out defense for the past few weeks while they recorded six consecutive wins. But on Saturday, the team regressed back to last season’s defense, which was statistically the worst in school history.

“It’s something you just can’t explain,” senior cornerback Carrington Byndom said. “Sometimes, you don’t know why things go the way that they do. As a defense, we have to make sure that we come out and start fast and we just didn’t. We just need to do better.”