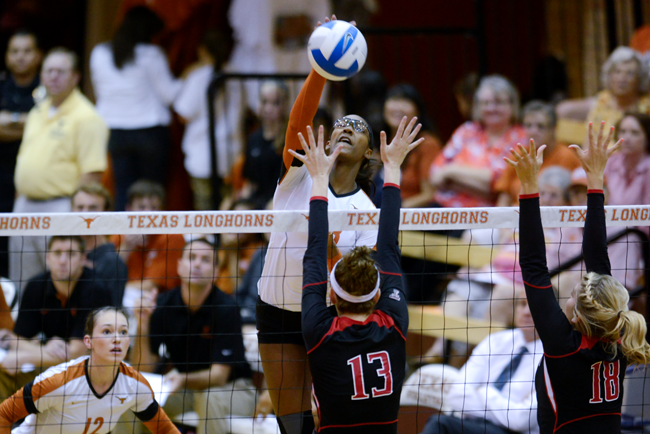 Bailey Webster has made the most of her four years at Texas, earning All-American honors. As a senior, Webster is hitting at a .295 clip on the offensive end and ranks second on the team with 270 kills this season.

Five years ago, it looked as if the 6-foot-3-inch outside hitter from Maryland, Bailey Webster, was ready to take over the Texas program. Webster was the nation’s top recruit, earned All-Big 12 freshman honors and was slatted to replace All-American Destinee Hooker in the lineup, becoming the star everyone expected when she signed.

But in preseason workouts the next season, in her short-lived sophomore campaign, Webster went down with a knee injury. Surgery cost her an entire season, and a chance at helping her team.

“Obviously we miss her, and we knew that she was going to be a huge part of the team,” then-captain Juliann Faucette said after the injury. “We hope that her recovery is fast and she’s set up for next year.”

That’s exactly what happened. Webster came back the next year in dynamic fashion, earning AVCA All-America first team honors. Then she repeated her production the next year, taking home first-team honors once again and sporting her signature leg brace in the process.

But her accolades and play are sometimes overshadowed by junior Preseason Player of the Year Haley Eckerman, who plays the same position.

Webster’s .326 career kill percentage trumps Eckerman’s .270 mark. And in every year the two have played together, Webster outhit Eckerman in terms of percentage. But Webster doesn’t think she’s being overlooked.

“I don’t ever think of it like she is overshadowing me,” Webster said. “Haley and I are really good friends and we are teammates first and foremost. All the honors she gets she deserves.”

Although Eckerman may have the better overall game — her defense and service skills trump Webster — Webster may be the more lethal offensive player, committing fewer errors and executing at a higher percentage.

“Honestly, I’m just working on hitting in practice and being smart,” Webster said. “Every set isn’t going to be perfect. Those moments when you can choose to swing your hardest or play it smart helps your hitting percentage”

Now in her fifth and final season, she looks back on everything that has happened.

“I’ve grown a lot. A lot,” Webster said. “Especially after my knee injury. This program has made me a better person.”

And with the tournament just around the corner and her time winding down, Webster has enjoyed every minute of her time donning burnt orange.

“It’s really exciting and especially being my fifth year,” Webster said. “Every season is exciting and different. We have a chance to be a better team by the time it comes. We have a lot to work on.”

And that work continues Thursday when West Virginia (18-11, 4-9 Big 12) comes to Gregory gym at 7 p.m. A win and an Iowa State loss would guarantee Texas at least a share of the Big 12 title.