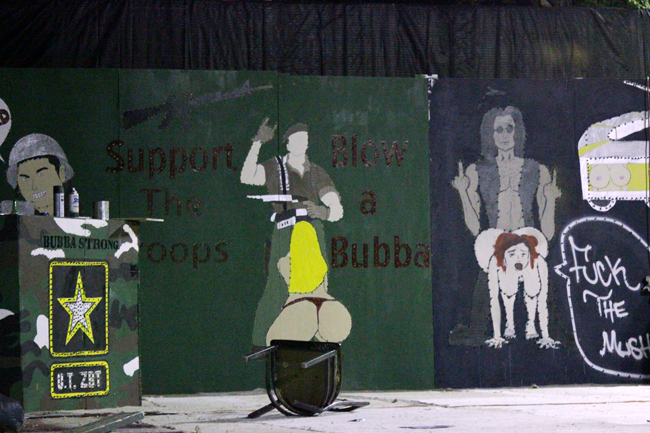 Members of the UT chapter of Zeta Beta Tau responsible for painting this mural for their annual Pat O’Brien party face hearings from the chapter’s judicial board in the coming weeks.  " />

Members of the UT chapter of Zeta Beta Tau responsible for painting this mural for their annual Pat O’Brien party face hearings from the chapter’s judicial board in the coming weeks.

The mural, which was painted over earlier this week, depicted several graphic sexual images. In one, a naked woman was depicted from behind performing oral sex on a man dressed in an army uniform next to the words “Support Our Troops — Blow a Bubba.” In another, a fully naked woman is shown masturbating atop a pirate ship. Other images included a leprechaun circled by the words “Show Us Your Clitoris” and a topless female character from Nickelodeon show “The Fairly OddParents.” It is unclear how long the images were displayed in the backyard of the ZBT house, located on West 28th Street and Salado.

The mural was one of many decorations on wooden platforms currently in the ZBT yard, which were designed and created by newly inducted members of ZBT for the annual “Pat O’Brien’s” party named after the famous New Orleans bar. According to the ZBT website, the party traditionally occurs on the weekend before Thanksgiving.

“Thousands of guests show up to the party — many even fly in to Austin for it,” according to the website. “Months of preparation go in to making [Pat O’s] one of the best parties on campus.”

At press time, no announcement had been made to cancel the event.

Dean of Students Soncia Reagins-Lilly said her office is looking into the matter and has reached out to ZBT officers.

Members of ZBT, including the fraternity’s officers and pledge masters, refused multiple opportunities to comment.

According to Bolotin, the mural was painted over as soon as chapter officers realized they were inappropriate.

“The immediate action was to see that the images were removed because the chapter leadership understood that they were inappropriate,” Bolotin said.

Bolotin said the ZBT members responsible for the mural are currently going through hearings conducted by the chapter judicial board, with a sentencing to be decided within a couple weeks. He was not able to provide names of the individuals in question.