“Catching Fire” is a faithful adaptation, but incomplete film 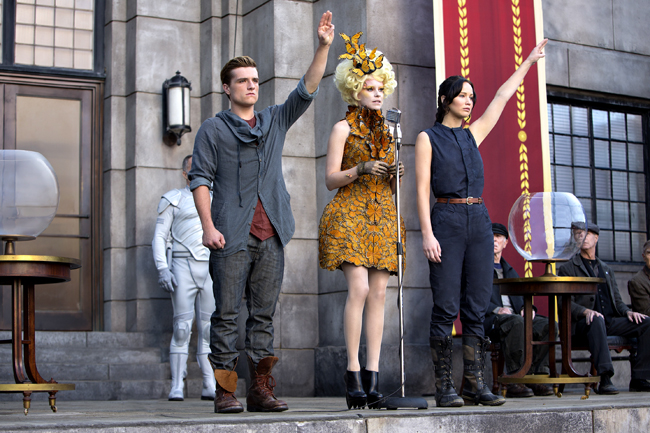 As soon as “The Hunger Games” books attained massive popularity, it was inevitable that they would be adapted into an equally popular film series, and the first film certainly made a big impression on the box office. “Catching Fire,” the hotly anticipated sequel, irons out many of the wrinkles from the first film while following an almost identical formula. It appears to be a fairly faithful adaptation, but it’s also an incomplete film, more interested in getting pieces into place for the next film than telling its own story.

This sequel follows Katniss (Jennifer Lawrence) and Peeta (Josh Hutcherson), the most recent victors of the Hunger Games, a brutal method of population control that pits teenagers against each other in a fight to the death. As Katniss and Peeta are paraded around the country on a victory tour, they struggle to maintain a mostly feigned romance, with the sinister President Snow (Donald Sutherland) breathing down their necks. After their tour, Snow announces the 75th Hunger Games will use victors from past games, sending Katniss and Peeta back into the arena once again.

“Catching Fire”’s first half hour moves efficiently, establishing its principal stakes and conflicts, but then takes its time getting to the event, opting instead to set up the oppressive government that serves as the series’ antagonist. The struggle against “the man” is a familiar narrative, but “Catching Fire” fails to bring any originality to it. This institution is fairly one-dimensional, its self-serving injustice is more cartoonish and repetitive than self-righteously compelling, and there’s little in the way of development or motivation for the cardboard leaders at its head.

That oppressive government is represented by the perfectly menacing Sutherland and the absolutely chilling Philip Seymour Hoffman. At this point in his career, Hoffman can turn in a great performance while barely trying. Even as he coasts on his icily aloof persona, he’s almost the best thing about “Catching Fire,” only bested by Lawrence.

In the first “Hunger Games,” Lawrence did admirable work as a stubborn heroine thrust into a terrible situation, but her performance here is markedly better. Katniss is profoundly damaged after the events of the first film, and Lawrence visibly wears the weight of her actions, bringing a conflicted determination to her role. Throughout the film, Lawrence elevates every scene she plays, and it’s the kind of performance that reminds viewers exactly why Lawrence is in such high demand these days.

Despite the strong performances on display, “Catching Fire”’s greatest weakness is its source material. The most interesting element of the first film was the interplay between the different tributes heading into war together. This film mostly eschews that, as Katniss, Peeta and the allies spend most of their time battling external threats, like poisonous fog and rabid baboons.

The games are essentially abandoned when the film demands it, and a late-in-the-game twist robs Katniss of any agency, revealing her as a pawn in a much larger and, presumably, more interesting plot. Even more frustrating than realizing the Hunger Games were a distraction to hide the real plot of the film is “Catching Fire”’s cliffhanger, a monumental occurrence robbed of any impact by being summed up in a line of dialogue rather than a sorely needed visual representation.

“Catching Fire” is a better film than the first one. Its characters are more fleshed out, and the actors are sharper and more comfortable in their roles. Director Francis Lawrence does a great job with the lush jungle setting of the games but fails to craft a complete story. The film’s final twists reveal it as more “The Matrix Reloaded” than “The Empire Strikes Back,” a middle chapter designed to get the pieces into place for a big finale. While fans of the book will certainly appreciate the devotion of this adaptation, newcomers may find themselves wondering what all the fuss is about once the credits roll.