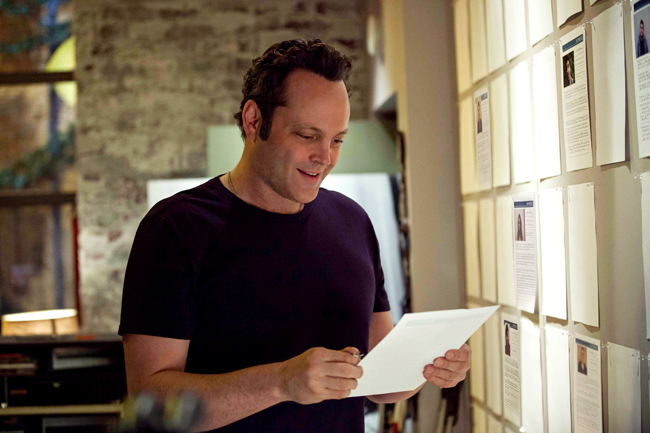 The past of David Wozniak (Vaughn) catches up to him when he is informed that, after donating sperm multiple times under the alias “Starbuck,” he has fathered 533 children. When a large chunk of his offspring bands together to sue the sperm bank into revealing the identity of the father, Wozniak takes charge of his life, deciding to get to know his sons and daughters one-by-one.

The premise is unoriginal — the film is a remake of the 2011 French film “Starbuck” — but “Delivery Man” explores new ideas, compared to most situational comedies. Wozniak’s many children have disparate personalities and conflicts. They’re treated as actual characters, not mere comic relief. This leads to some poignant moments in which Wozniak must figure out how to meet their needs. For a movie that seems like a typical screwball comedy, “Delivery Man” offers touching sincerity, especially when Wozniak struggles to bond with one of his children who has a mental disability.

Vaughn puts visible effort into the somber side of his character, rather than leaning on his stock screw-up archetype. But much of the comedic weight falls on his friend and lawyer, Brett (Chris Pratt). While Vaughn plays around with the role of an invisible guardian angel, Pratt steals the show with his antics. It is hard to believe, but Pratt, rather than Vaughn, is the funny man in this film. It’s easy to get wrapped up in Vaughn’s mostly serious performance and Pratt’s jokes, but the audience never sees much development from Wozniak’s few offspring actually introduced
on screen.

“Delivery Man” thankfully retains “Starbuck” writer and director Ken Scott, the biological father of the film itself. His script adds depth and emotion to a mostly generic situational comedy, managing not to become too predictable, and aptly balancing comedy and drama. Some of the jokes miss the mark, but the movie deserves commendation for reaping meaningful content out of a premise devised purely for laughs. “Delivery Man” is a surprising and unexpected look into fatherhood and responsibility, while also touching on a mostly unexplored side of Vaughn’s acting abilities.