Longhorns claim at-least share of the big 12 crown with a sweep of West Virginia. 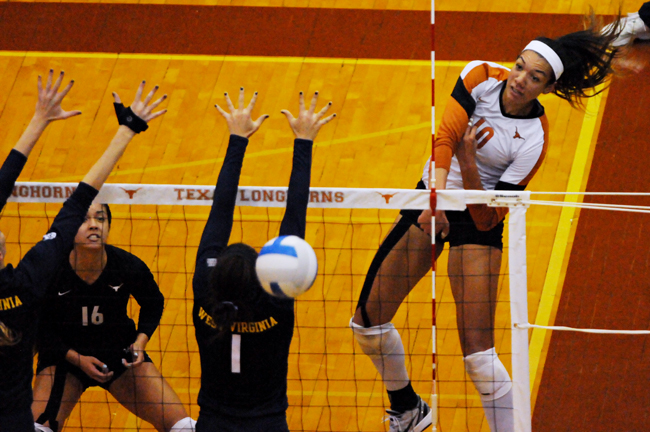 The top-ranked Longhorns kept their perfect Big 12 record alive and earned at least a share of the Big 12 crown, their seventh total, with a dominating victory Thursday night against a weaker West Virginia (25-17, 25-10, 25-15).

The Longhorns won their 47th consecutive home Big 12 match and 15th match in a row. It was junior All-American outside hitter Haley Eckerman that led the charge with 27 kills on .634 hitting, tying her career-high for kills in a match. After struggling in the early stages of the season, she is starting to find her rhythm at the perfect time.

“[Eckerman] had a phenomenal match,” head coach Jerritt Elliott said. “People don’t understand how diligent she’s been. She’s playing all the way around, passing and playing D. She is working hard and her numbers are getting better.”

The Mountaineers (18-12, 4-10) began strong on a 7-3 run to start the first set. But, behind Eckerman, the Longhorns went on a 10-2 run, taking control of the match from then on. Eckerman was one kill shy of equaling the entire Mountaineer team.

“I’ve been feeling good,” Eckerman said. “It’s nice to have a game like that.”

The second game saw the Longhorns go on a 9-0 run, just four points into the game to open a big lead. They didn’t stop there, though, stretching to a 22-6 lead. They allowed just 10 points, the fewest in a game this year.

“It feels good to be in that rhythm,” said Kat Brooks, a sophomore libero who had four service aces in the game. “That whole game we were in our groove and doing our roles.”

“Our blocking was really good,” Elliott said. “When you start blocking, it puts pressure on the other team. Chiaka [Ogbogu] especially did a phenomenal job at the net.”

The Longhorns are hitting their stride as they look forward to the NCAA tournament.

“We can win out and do something this program has never done before,” Elliott said about the possibility of going unbeaten in conference. “Our goals are winning this thing outright and getting into a rhythm heading into the tournament.”

And they can do just that Saturday against Kansas State, where a win secures an outright Big 12 title.

“We had a lot more fun today,” Eckerman said. “We were more energetic these past few games.”

The win marked the 10th consecutive season of 20 or more wins under Elliott, an impressive feat for any program.

“I fooled some players into coming to Texas and I didn’t make them worse,” Elliott said. “This really helps recruiting and shows the hard work of the players.”