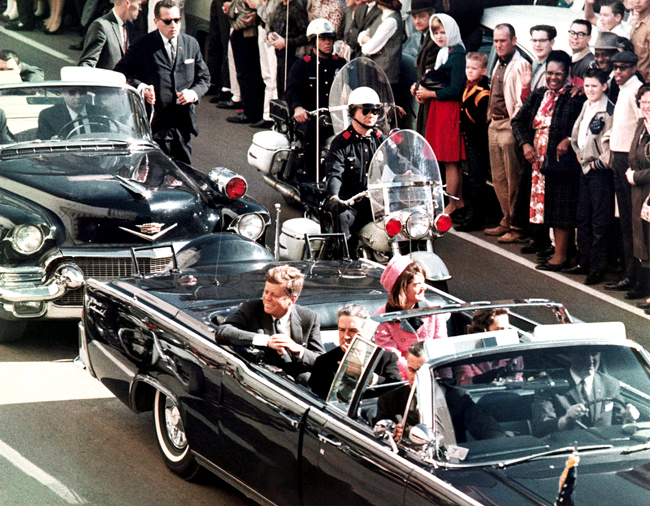 Editor’s Note: Fifty years ago Friday, while traveling in a motorcade through downtown Dallas, President John F. Kennedy was shot from a sixth-floor window. Kennedy was immediately rushed to Parkland Hospital, where all efforts were made to revive him, but the president was pronounced dead at approximately 1 p.m., just half an hour after the shots were fired. The impact was immediate and felt the world over, but it had important implications for Texas as one of its own, Lyndon B. Johnson, rose to the presidency following the assassination of Kennedy.

Daily Texan reporters immediately fanned out across campus and interviewed students on their reactions to the news of Kennedy’s death. Although some noted their disagreement with Kennedy’s policies, all expressed disbelief that such a violent act of rebellion against the government could have happened in the modern era. Selections from these comments can be found below.

“This is the biggest shock the country has had since the war. I don’t know about the others, but it scared the hell out of me.” — Tom Whitaker, freshman

“The country has been placed in confusion. I’m a Republican and didn’t care for Kennedy’s policies, but his assassination is too much. We’ll have a hard time adjusting to it. I’m just thankful that Johnson was unhurt.” — Lee Smith, sophomore

“Not only domestic history but international history will now be remade.” — H. M. MacDonald, government professor

“I just don’t think he should have come to Dallas. The feeling in Dallas was stronger against Kennedy than anywhere else. It’s sickening.” — John Cope, sophomore from Dallas

“It’s a great loss to our country. It was an unreasonable act in the ‘age of reason.’” — Elsie Ramirez, junior

“I’m a conservative and didn’t agree with Kennedy on his policies — but he was president. His assassination hurts me very much. I’m sorry.” — Gayle Guffey, freshman

“In the death of Mr. Kennedy, the world lost a shield against radicalism and uneducatedness.” — Mikdam Al-Habeeb, sophomore

“This definitely puts a bad look on Texas. It appears that the South is just not what it should be.” — Larry Lindburg, sophomore

“Hopes for peace under Kennedy’s leadership had been pronounced by his actions. He possessed the vigor and wisdom needed to make a great president. As an Arab student, I share my condolences with the American people.” — Mohamed Mahdi, senior

“My reaction was one of shock and I was ashamed of myself to think that this could happen here. This … this is something that happens somewhere else, not in the United States.” — Curtis Hayes, graduate student

“When I heard about the president’s death, I just went on to my room. I felt kind of sick. I don’t understand. It just doesn’t make sense.” — Betty Klingman, freshman