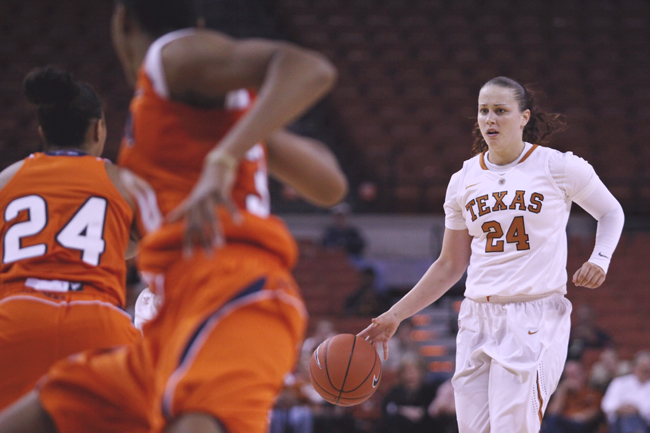 Texas hasn’t topped No. 6 Stanford in a meeting since the Sweet 16 round of the 1988 NCAA tournament. Texas knocked Stanford out of the tournament with a 79-58 win before falling to Louisiana Tech in the Elite 8 in overtime.

Before that, the Longhorns beat Stanford in November 1981, committing only six turnovers– the program record. The Longhorns competed for the NCAA championship that season.

When the Cardinals enter the Frank Erwin Center on Saturday, Texas looks to defend its undefeated 3-0 season start. Stanford is coming in with a 4-1 record, having only lost to top-ranked UConn 57-76.

“We’ll be a different team come December, March, April,” Stanford senior All-American Chiney Ogwumike said of the loss. “The goal is to grow from this experience. This team is the standard. Take that as motivation to get better.”

The Cardinal hold a 5-2 overall lead in the series against Texas. But Longhorn senior guard Chassidy Fussell doesn’t let that faze her. Fussell has executed consistently against the California program during her time at Texas. She’s scored a team-leading 17 points in each of her match-ups against the Cardinals, in addition to two steals in the 2011 season opener. After a rough start to that game, Fussell said she had to tone down her excitement.

“I think I came up a little too hyped for this game,” Fussell said. “I did not really have the jitters, I do not really know what it was. I feel like everybody on the team can be better than this game.”

Two years later, Fussell has matured and battled through many more games in her 1400 plus-point career. Averaging 16.3 points per game this season, she remains a key piece to the Longhorns’ success. But she doesn’t act alone.

Junior forward Nneka Enemkpali played in her Longhorn career debut against Stanford in 2011 with just two points and a block in nine minutes. She now poses a fierce offensive and defensive threat, coming off a 19-point, eight-rebound performance against New Mexico on Tuesday. Enemkpali has transformed her skills even since this season’s start.

“If you watch the first game [we played against UTSA], I was in foul trouble the whole game,” Enemkpali said of her adjustment to more stringent NCAA defending rules. “But then coach challenged me and told me I need to be on the floor because I’m productive on the floor, not off the floor.”

Enemkpali hopes to be productive on the floor as the Longhorns seek to end the 25-year losing streak against the Cardinal. Tip-off is at 12:30 p.m.