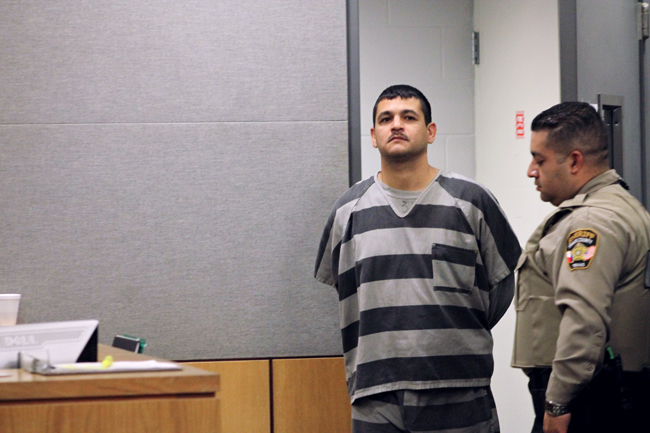 Gene Vela was booked in the Travis County Jail on Nov. 11 after aiming a handgun equipped with a laser at two policemen through his apartment window in North Campus.

Correction: This article has been corrected after its original publication. Steve Brand, prosecuting attorney for the District Attorney's Office, argued to increase Gene Vela's bond to $1 million on Nov 22. The judge did not rule to change the amount of the bond, which remains $100,000.

Steve Brand, prosecuting attorney for the District Attorney's Office, argued in court on Friday to increase the bond for Gene Vela, a public affairs graduate student to $1 million claiming Vela is a threat to the public at a court hearing Friday.

Vela has been charged with aggravated assault against a public servant after he was involved in a standoff with the police Nov. 10, according to UTPD. The bond, set last week, remains at $100,000.

Vela was represented by Adam Reposa and Edmund Davis. Reposa said he believed without proper treatment to Vela’s post traumatic stress disorder, Vela was going to deteriorate in jail. Vela is a Marine Corps veteran who served in Iraq in 2002.

“[He needs to] take the veteran treatment opportunities that are available to him,” Reposa said. “He was only recently, probably within the last 69 days, properly assessed/given a [post traumatic stress disorder] diagnosis.”

Steve Brand, prosecuting attorney for the Travis County District Attorney’s Office, said Vela should not be released from custody for veteran treatment because he is a danger to the community.

“Police are frightened by this guy, concerned by him, they feel that he poses an ongoing danger to the Travis county community,” Brand said.

Vela was booked in the Travis County Jail on Nov. 11, the day after being shot in the torso by police. UTPD said Vela was shot after aiming a handgun equipped with a laser at two policemen through his apartment window in North Campus. Police were originally summoned to his apartment following a 911 call from a friend of Vela’s.

Vela's next hearing is set for January 2014, although Brands said he expects this date to be moved up.