Immigration reform is an issue of human rights 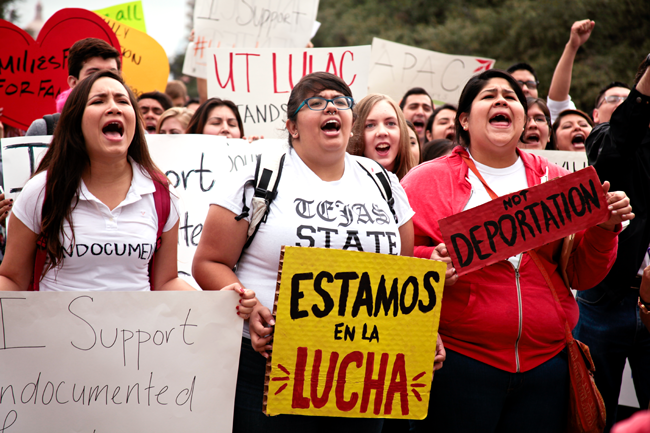 Last week, University student group Young Conservatives of Texas proposed a controversial “immigration sting” activity, launching the Dream Act, which would provide a pathway to citizenship for undocumented immigrants brought to the U.S. as kids, into the national debate. The activity, which was later canceled, asked students to “track down” group members wearing T-shirts saying “illegal immigrant” and catch them in exchange for gift cards.

Because of the publicity over the game, I joined a march led by the University Leadership Initiative, a student organization pushing the Dream Act. We delivered a petition supporting House Resolution 15 to the office of U.S. Rep. Roger Williams, R-Austin. The  legislation attempts, among other things, to balance border security needs with the concerns of those who were brought as kids to the United States by undocumented parents.  “DREAMers,” as they are known, still lack vital paperwork, leaving them one step away from deportation.

Williams, who represents Austin’s 25th district, was away from the office that day, but if he is serious about supporting families, he should support this bill or the bipartisan Senate bill approved earlier this year.

The political lines on immigration reform are clearly drawn. Liberals argue that conservatives need to get with the times and approve the Dream Act or some type of comprehensive immigration reform to court the growing Latino population.

Conservative politicians who oppose reform believe it will only encourage immigrants to flood the border before reform is passed so that they can reap the benefits of a more lenient system. According to a Washington Post article published in July, border crossings have increased. UT sociology professor Nestor Rodriguez in US News and World Report attributes the increase to instability in the countries of origin, not impending immigration reform.

Both side’s arguments miss a larger issue: The debate over HR 15 should not be about justice for lawbreakers but rather about stability for families and basic human dignity for all. As Hirokazu Yoshikawa, the academic dean at the Harvard Graduate School of Education,  and  Carola Suarez-Orozco, co-director of immigration studies at New York University, pointed out in 2012, the deportation of 400,000 immigrants annually causes economic hardships through lost parental income and psychological harm to the children of those deported. How much more unjust is deporting a student who was brought here by his or her parents? For conservatives, who lecture the public on the sanctity of life, traditional family and marriage, not to support the reform bill is not just politically tone-deaf but also an affront to every American’s conscience.

A common objection to immigration reform is that it is not meritocratic and undermines the rule of law. This is a fair point, but consider that one pathway to citizenship is to invest heavily in the American economy. That pathway is called the EB-5 program, and, under it, foreigners who invest $1 million in a U.S. commercial enterprise — or $500,000 in high-risk and rural areas — may gain U.S. citizenship.  Theoretically, the venture has to create 10 jobs, but in reality, follow-ups are rarely conducted to see if that goal is achieved. Basically, the investor just has to put up the money. It would seem, then, that U.S. citizenship is not just a matter of sanctimonious birthright or meritocracy but, rather, is up for sale.

We should encourage foreign investment. But if a Russian businessman or British lawyer can buy their way into the U.S. by purchasing multi-million-dollar real-estate or ski resorts in Vermont, shouldn’t hard-working students or migrant workers also have the opportunity to pursue the American Dream?

Comprehensive immigration reform may give what some see as a free pass to those who don’t deserve it, but if conservatives are serious about keeping families together, HR-15 seems like a no-brainer to me.

Furthermore, Catholics, like Paul Ryan and House Speaker John Boehner, should recognize the unjust reality facing undocumented immigrants, be they a deported child or parent in the U.S., an undocumented worker who dies crossing the southwestern deserts, or — as Pope Francis has highlighted half a world away — boatloads of immigrants who die crossing the Mediterranean to get to Italy. We all have a stake in human dignity.

Immigration is a complex and serious issue. If conservatives are sincere about educating the public about the cons of immigration reform, they should roundly reject YTC’s 21st-century version of Cowboys and Indians and hold a real discussion.

Write your congressmen, Republican Roger Williams of the 25th district, Republican Lamar Smith in the 21st district — which includes West Campus — and Democrat Lloyd Doggett of the 35th district, and propose some constructive solutions to this pressing issue.