Hex Rally canceled because of weather 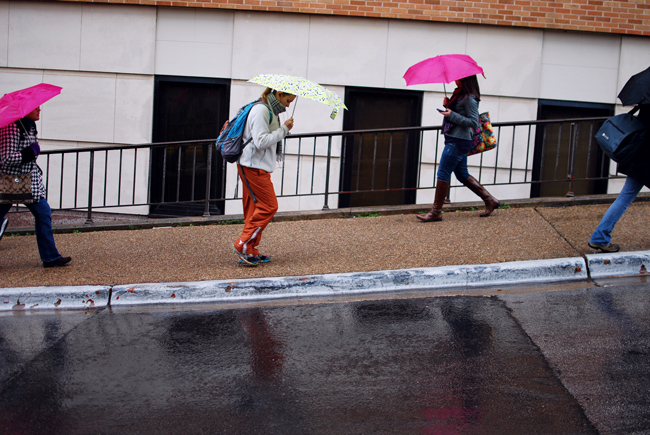 The Texas Exes canceled the annual Hex Rally on Monday because of inclement weather and the effects of the rain on all the participants and electrical equipment involved.

The tradition began in 1941 after a local fortune teller advised the Longhorns to burn red candles to perform a “hex” on Texas A&M University, which was ranked No. 2 going into the Thanksgiving Day game. Texas won the game 23-0 in College Station. Since then, the rally has only ever been canceled once before — in 1999 out of respect for 12 Texas A&M students who died after the Aggie Bonfire famously collapsed during Thanksgiving week.

Rain gauges at Camp Mabry have recorded approximately 2.74 inches of rain since last Thursday at midnight. The lowest temperatures have been around 36 degrees.

Journalism junior Eleanor Holmes said she understood why the Texas Exes canceled the event, but she still wanted to carry out the tradition started in 1941.

“I think it’s important that the student body [makes sure] the Hex Rally, and these traditions didn’t die when A&M went to the SEC,” Holmes said. “It’s a Texas tradition, and we have to make sure that it continues on.”

Kimmel said the weather is expected to change Tuesday morning, and Austin should not expect any ice in the mean time.

“We just weren’t cold enough to get the ice … but we just missed it by a couple of degrees, being a little bit too warm,” Kimmel said.

Computer science junior Rebecca Carrender said she will be traveling home for the Thanksgiving holiday but is not worried about the weather as the system leaves.

On Tuesday, the temperature is expected to dip to 31 degrees, with a high of 49 degrees, according to the National Weather Service.