Texas and Texas Tech have opposite styles, but the Longhorns’ match up better 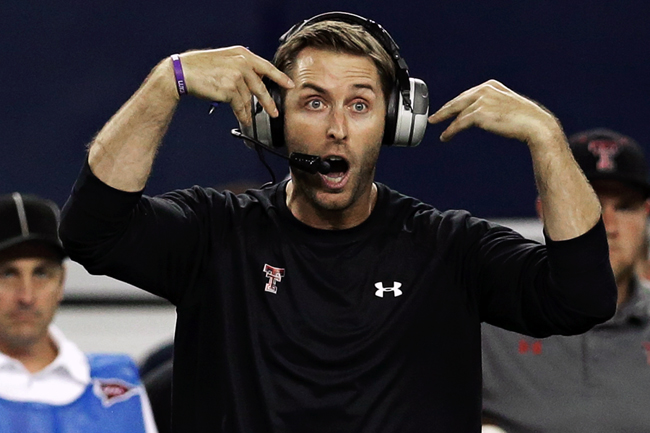 Texas and Texas Tech could not be more different. Led by its former quarterback-turned-coach Kliff Kingsbury — who may or may not moonlight as Ryan Gosling’s stunt double — the Red Raiders feature a high-octane offense that moves the ball effortlessly. The Longhorns, on the other hand, have relied on the leadership of a veteran coaching staff and strong running game to win six of their seven Big 12 games.

During his tenure as quarterback for the Red Raiders, Kingsbury threw for 95 touchdowns and more than 12,000 yards. He has restored this gunslinger mentality in Lubbock — absent after the school split ways with Mike Leach in 2009 — as Texas Tech enters with the nation’s top passing attack despite instability at the quarterback position. Through 11 games this season, Texas Tech quarterbacks Baker Mayfield and Davis Webb have collectively covered more than 300 passing yards in nine games, including four 400-yard performances and four 40-point games.

This is an offensive philosophy that could not differ more from the Longhorns’, who have only scored more than 40 points once this season. Between junior quarterback David Ash and senior quarterback Case McCoy, Texas has had just one 300-yard passing game this year, which came against New Mexico State. The Longhorns choose to rely on a running game, averaging nearly 200 yards per game.

But it is the matchups on defense that will decide the outcome of this game. On paper, the Longhorns hold a clear advantage. Thanks to a talented veteran secondary, Texas has not surrendered a 300-yard passing game all season. Instead, its Achilles heel is defending the run — far from a strength for Texas Tech.

The Texas Tech defense faces a tougher matchup. During their 7-0 start, the Red Raiders allowed opponents to run for 200 yards once. But in its past four games — all losses — Texas Tech has allowed an average of 297 rushing yards per game. In each of those contests, its opponents have run the ball at least 45 times and averaged more than 5 yards per carry.

This bodes well for the Texas offense. The Longhorns have topped 200 rushing yards three times in Big 12 play and have run the ball 48 times per game in their last five contests.

From their playing styles to their coaches’ styles, these teams have little in common. But when they share the same field on Thanksgiving night, the Longhorns’ weaknesses and strengths will overwhelm the Red Raiders.