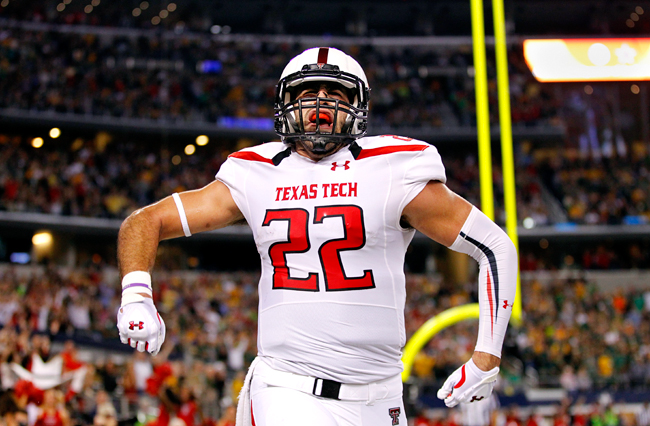 Junior tight end Jace Amaro is starting to claw his way into the Texas Tech record books, the same books that NFL standouts Wes Welker, Michael Crabtree and Julian Edelman have etched their names into.

He needs just 143 more yards to leave only Michael Crabtree as the only Red Raider to have more receiving yards in a single season. Just 17 receptions to find himself behind only Crabtree in single-season receptions.

He became the first player on any team since 2008 to be named a semifinalist for both the Mackey Award, which is given to the nation’s best tight end every year and the Biletnikoff Award, which is handed out to the country’s top receiver. Amaro was even named to seven midseason All-American teams.

But at this time last year, it wasn’t smooth sailing.

He was coming off a frustrating freshman season that saw him on the sidelines and getting arrested for credit card fraud to buy drinks at a bar.

He was in the midst of a career-best game when quarterback Seth Doege hit him across the middle. He jumped to make the grab, but got drilled in the midsection.

Amaro thought he just got the wind knocked out of him, so he returned to the game in the second half to finish off his 156-yard game, setting a new career high. But near the end of the game, he realized something wasn’t right. He was struggling to breathe.

“That kid looked like a piece of hamburger meat a while ago,” then-head coach Tommy Tuberville said after the game. “He threw up the entire halftime. He’s a football player. You can tell his enthusiasm kind of bleeds over into the other guys.”

And bleeding is exactly what happened. He suffered a lacerated spleen, fractured rib and internal bleeding.

Amaro struggled to eat and talk. He couldn’t even go to class for three weeks. He did his homework from the comfort of his own bed. Texas Tech rarely brought the injury up.

“Well, the first doctor told me I was going to be out for two weeks. I was pretty pissed about that,” Amaro said. “The next guy said four, the next guy said six, and the last one told me three months. So it was kind of a thing where I didn’t want to talk to anybody for a while. So I was mean, that’s just kind of how it was. It was really frustrating.”

But Amaro rushed back to the bowl game to finish his season. And now, the former four-star recruit is beginning to shine. He has been a constant for a team juggling freshman quarterbacks — one of whom, Bake Mayfeild, is the first true freshman walk-on to start a season opener for a
BCS program.

“He’s a big boost on our team the way he plays the game with passion and intensity,” head coach Kliff Kingsbury said. “He wants the ball. He wants it on him, and you appreciate that. His effort in the off-season programs, during practice, he gives you what he’s got and his teammates respect that.”

Even Amaro is more
confident this year. He needs just 20 catches and 173 yards to set the single-season record for receptions and yards by a tight end, a position which the Mackey Award honors every year. Yet the Mackey Award didn’t even have Amaro on its initial watch list.

“I know what kind of player I am, and I’m not sure why I’m not on it,” Amaro said earlier this year. “But I know that these guys in this building and the media and everyone else has a plan for me. I’m just going to keep on playing.”

Amaro is now a Mackey Award semifinalist and Texas will have its hands full trying to slow him down.