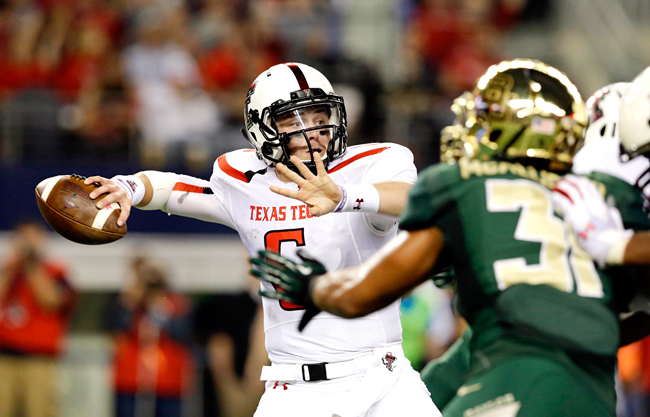 For a team that leads the nation in passing, Texas Tech has an accomplished runner in Kenny Williams, the leading rusher for the Red Raiders with 439 yards this season. His eight touchdowns show he can put the ball in the end zone when in the right position though. Williams is a powerful running back, weighing in at 225 pounds and can cause the Longhorns problems in the red zone. Although the Red Raiders rank 104th in rushing, Williams will ride the potent passing game to find optimal touches close to the goal line. Texas should work on its red zone defense to prepare for Williams.

Speaking of that passing game, Baker Mayfield is the orchestrator that leads it. In his first season Mayfield, leads the team 2,078 passing yards and 12 touchdowns despite missing three games earlier this season. He has a plethora of receivers to get the ball to on any given play and has taken advantage of it thus far in the season. Although his eight interceptions show that the air-it-out style of Texas Tech can lead to turnovers, Mayfield has shown great poise this season. The Longhorns need to keep the pressure on him as he’s capable of reeling off short, medium and deep passes whenever he gets a feel for the game.

Amaro is the leading receiver for the Red Raiders, amassing 92 receptions for 1,157 yards and six touchdowns on the season. His production from the tight end position has taken the offense to the next level as his big frame makes him a viable red zone threat. The Longhorns already have to worry about Williams when the Red Raiders get close to the end zone and Amaro makes it that much more difficult to plan for this offense. Amaro can make catches in any part of the field and his size will give him an advantage over most of the Texas defenders. He is the guy that Texas must shut down in this game.

Texas Tech’s leading tackler, who shares his name with someone more famous than any other teammate does, will be a force in this game. Smith leads the defense with 88 tackles and 3.5 sacks this season and will look to get pressure on the shaken Case McCoy, who had a tough time with Oklahoma State. Smith is prototypical size for an outside linebacker and will get pressure in the backfield on more plays than not in this game. If there’s one player to look out for on the 83rd-ranked defense, it’s Smith.