“The Book Thief” is a charming, yet unrealistic adaptation 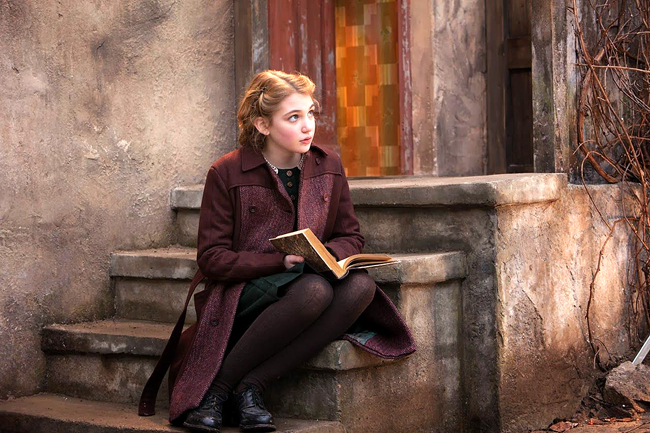 “The Book Thief” takes a creative approach to its depiction of World War II. The film is set in a small German community caught in the war, its citizens conflicted about the views of the supposedly righteous Nazi party. Adapted from Markus Zusak’s acclaimed novel, the movie aspires to bring a fresh, compelling perspective to a well-worn genre, though it sometimes misses the mark. The film’s characters and story are among its biggest strengths.

After losing her brother and being separated from her mother, Liesel Meminger (Sophie Nelisse) is sent to live with new foster parents Hans (Geoffrey Rush) and Rosa (Emily Watson). Liesel adapts to life in the small fictional town of Molching, making friends with Rudy (Nico Liersch) and discovering a passion for reading. Her obsession with books leads her to do anything to get one. Her new family’s well-being is put at risk, though, when Hans takes in Max (Ben Schnetzer), a young Jewish man who is on the run because of the persecution. Liesel and her family attempt to hide Max while the country prepares itself for all-out war.

“The Book Thief” is perfectly cast, and Nelisse is enjoyable as Liesel, successfully conveying a variety of emotions. She harnesses the complexity of her feelings toward her home country, while always retaining a youthful energy and curiosity. Rush steals scenes as the quiet, wise father figure and brings a gentle tenderness to his character. Schnetzer juggles the righteous anger and fear of being discovered as a Jew in Germany.

“The Book Thief”’s greatest strength and weakness may be Florian Ballhaus’ gorgeous cinematography, which turns Molching into a lushly realized wonderland. Unfortunately, that setting is a stark contradiction to the harsh reality of war that its characters are facing, and director Brian Percival strays from the ugliness inherent of its historical context. “The Book Thief” is almost flippant in its tension-free depiction of one of history’s most brutal periods, and Percival’s vision is far too tame. “The Book Thief” would have been more effective if Percival didn’t shy away from the realities of war time.

Fans of the novel should be mostly pleased with Percival and screenwriter Michael Petroni’s adaptation. While they certainly have a handle on bringing the characters and certain aspects of the world around them to life, many character details from the book are glazed over and some psychologically insightful moments are sorely missed.

Despite these drawbacks, the film’s strengths outweigh its weaknesses. The cast delivers stellar performances that support an emotional story. The movie might not be the most exciting World War II film ever made, but it has enough interesting components to create an intriguing, emotional tale.