Whirlwind that came with transferring, groin injury has ended with successful senior season for Fera 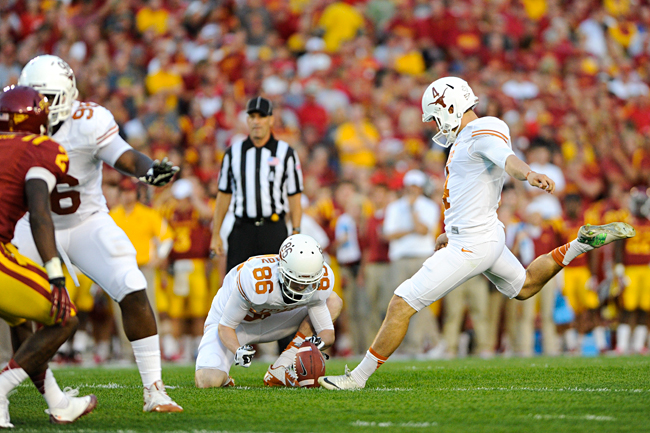 In the past two years, Anthony Fera has gone through transition. Probably more transition than the average person goes through in a decade.

The senior place-kicker and punter started his college career at Penn State, where he spent three years before deciding to transfer amid the Jerry Sandusky scandal. To make matters worse, his mother was ill and he had an injured groin during his first year at Texas.

“It was very emotional,” head coach Mack Brown said. “Part of the reason he moved was because of family illness and then he had a strain that we didn’t know about and then he re-strained it. He left the teammates that he cared so much about and came to a team that he didn’t even know. He came in late so his life was really in turmoil.”

Sanctions at Penn State allowed Fera to transfer to his desired school without sitting out a year. Numerous coaches immediately made their pitch to Fera, including co-offensive coordinator
Major Applewhite.

Fera eventually decided on Texas with a little outside help. While his family now lives in Austin, he grew up in Cypress, Texas, where he regularly kept track of his eventual alma mater.

Two of his older sisters graduated from Texas and made their cases for why he should become a Longhorn. Fera also wanted to be closer to home to be near his mother, who was diagnosed with multiple sclerosis not long before he made his decision.

“Definitely coming down here and visiting swayed me to come here, but it was a hard decision,” Fera said. “My sisters wanted me to come, they were big Texas fans. But my parents wanted me to do what I wanted to do so I made my decision from there.”

Ferak who will get degrees from both Penn State and Texas, didn’t have a great first year at the 40 Acres. He re-aggravated a groin injury, causing him to miss seven games last year. Fera was a mere 2-for-4 on field goal tries in 2012.

“Definitely last year was frustrating,” Fera said. “I was never 100 percent healthy. It always felt like something was just off a little bit. But working hard in the offseason, getting back to 100 percent, and winning the job in camp just gave me a confidence boost that the coaches had a lot of trust in me.”

The turmoil didn’t last long. The new, healthy Fera has started to make the most of his Texas career, making 17 of 18 field goal attempts this season. On Monday, he became the first Longhorn to be named a finalist for the Lou Groza Award, given annually to the nation’s
best kicker.

Kickers, usually the quirkiest of players, sometimes keep to themselves and the other special teams units but, for Fera, it didn’t take long to fit in with his new teammates.

“You know those kickers are always a little bit different, I don’t know if they do a whole lot of fitting in,” senior offensive guard Mason Walters said. “Fera is a great guy. I’ve hung out with him a little bit and got to know him. He’s still a kicker, a little quirky, but we don’t hold that against him as long as he does his job. “

Fera has connected on 94.4 percent of his field goal attempts this season, putting him on pace to set a school record in that category.

It has been a roller-coaster career for Fera but he has managed to become one of the nation’s best specialists.

“It’s been crazy, starting off with Penn State, going out there,” Fera said. “I redshirted my freshman year. The next two years I played. Last year transferring here, the sanctions and stuff, that was a pretty crazy experience. Coming here I think was the right decision for me and my family. So it’s been pretty crazy. Now this year, I’m just trying to do the best I can.”