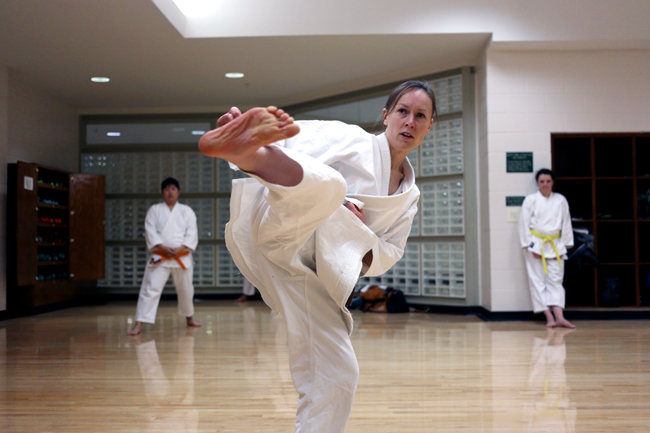 Linguistics grad student Elena Liskova practices her kicks at Gregory Gym as part of her karate training. Members of UT’s Japan Karate Association of Austin are motivated by their seek of perfection in both physical and mental aspects of karate .  " />

Linguistics grad student Elena Liskova practices her kicks at Gregory Gym as part of her karate training. Members of UT’s Japan Karate Association of Austin are motivated by their seek of perfection in both physical and mental aspects of karate .

Everyone knows how to kick or punch, but being able to do it with karate’s perfect, textbook style takes effort and practice. After each repetition, Karatekas — practitioners of karate — must pause and think to straighten their knees, turn their hips, pull their hands back quickly, turn their fists over at exactly the right moment and strike.

Perfection is hard to achieve, but members of UT’s Japan Karate Association of Austin seek it as their motivation.

“We are guided by the precepts in our Dojo Kun [training place rules], and the first precept in our Dojo Kun is to seek perfection of character,” the association’s sensei Tom Pilon said about karate’s training methods. “We are not doing karate; we are building people and we are building them to understand what perseverance is.”

Pilon teaches Shotokan, the most widely recognized style of karate. In English, karate is translated to “empty hand,” and Shotokan is renowned as the foundation of all weaponless traditional martial arts. It has a color belt ranking system — kyu — ranging from ninth to first. After earning a first-degree black belt, its participants rise through the ranks of dan, ranking from first to tenth.

“Within Shotokan, tenures of 20 to 50 years are common,” Pilon said. “These long tenures are only possible because of seeking perfection, and there is no other motivation that I know of that creates this amount of tenure.”

Hema Movva, engineering graduate student and president of UT’s association, said seeking perfection of character is applicable to not only physical but also mental aspects of karate.

“Most of the techniques we practice on the floor end up being very far from perfection, so we need to constantly introspect ourselves and refine our perception of perfect techniques,” Movva said.

Andrea Keidel, physics graduate student who is from Germany, said karate requires an abundance of physical and mental training.

“It’s the thing that your body isn’t used to doing necessarily, so there are lots of coordination, right hand and left hand, maybe there are something else in your right foot and left foot,” Keidel said. “The progress is slow, but you need to be patient and enthusiastic.”

While success on tournament stages are important, it pales in comparison to the development of character and pursuit of perfection Shotokan provides.

“We all intrinsically know that perfection is impossible, and yet we keep trying year after year,” Pilon said.