Despite adversity, Jackson Jeffcoat has no regrets from his time at Texas 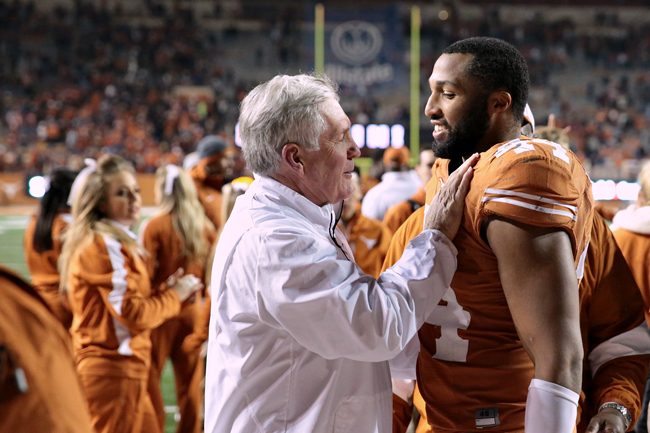 Jackson Jeffcoat hasn’t had the chance to reflect on his stellar four-year career yet. He said he’ll probably do that once the season is over.

The senior defensive end is far too focused on finishing this year with wins in his final two games to consider the past right now. But when he does finally get the chance to reminisce, he knows there will be a lot to look back on.

“I’ve learned a lot being here,” Jeffcoat said. “I think I’ve learned more than I would’ve anywhere else. I’ve just learned that the fun is in winning. You really start to realize how much fun it is to win.”

Billed as the second best high school prospect by ESPN in 2010, Jeffcoat more than lived up to his lofty expectations during his historic tenure with Texas. His 57 career tackles for a loss rank third on the Longhorns’ all-time list, while his 24.5 career sacks rank eighth in school history.

Head coach Mack Brown recruited Jeffcoat out of Plano West High School in 2010, and after four years, he believes the senior has been everything the Longhorns hoped for.

“He’s been what the advertisement was when we got him,” Brown said. “He’s tough, he’s smart and he’s started all of four years. He’s never been a problem of any kind. We’ve had a number of great defensive ends at Texas, and he should definitely be in that group.”

Things haven’t always gone exactly as the senior defensive end hoped they would. Jeffcoat endured a 5-7 record as a freshman in 2010, and he failed to attend a BCS bowl game in his first three seasons. In addition, he suffered torn pectoral muscles in 2011 and 2012, with the latter ending his junior season after just six games.

Despite this adversity, Jeffcoat carries no regrets from his career at Texas. He believes these struggles continue to shape him as a player as well as a person.

“I don’t regret anything because I think it’s helped me to grow,” Jeffcoat said. “I’ve grown a lot through the years. The injuries really helped me not take anything for granted. They really showed me that I love this game of football. … A while ago, I wasn’t able to hit anybody, and I just love it. All these things that have happened to me allowed me to enjoy this game and cherish it.”

Jeffcoat believes his ability to overcome his pectoral surgery has made his impressive senior season all the more rewarding. The defensive end has enjoyed a breakout year, setting a career-high with 10 sacks while leading the team with 18 quarterback hits and 19 tackles for a loss.

None of this will matter to Jeffcoat if he remains unable to lead Texas to a conference championship. He finally accomplished one major goal earlier this season with his first victory over rival Oklahoma, but Jeffcoat admits that failing to win a Big 12 title with Texas would be hard to stomach.

A win over Baylor on Saturday would allow Texas to earn at least a share of the Big 12 title that Jeffcoat craves. The senior defensive end expects his team to be ready for a dogfight with the Bears, and another standout performance would give him one more thing to reflect on when his career finally comes to an end.