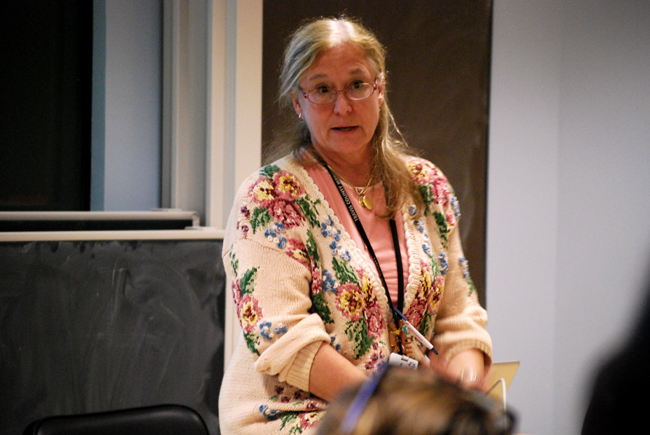 Patricia Aronin, a pediatric neurosurgeon, speaks to members of Kappa Rho Pre-Medical Honor Society on Monday evening. Aronin was one of three doctors who talked abou their experience as women in medicine.

Three female doctors cited professional persistence as a critical element of success in male-dominated fields in a discussion Monday.

Pediatric neurosurgeon Patricia Aronin said during her education, she faced isolating comments as one of the few women doctors in her specialty.

“There’s an element depending on where you are, there’s somewhat of a — for lack of a better term — cliquishness that’s hard to deal with because you’re not one of the guys,” Aronin said. “My chairman at my first job in Alabama kept saying keep your petticoat clean.”

Aronin said balancing her family with her professional career was a challenge she and many other doctors face.

“When I was in residency, I knew someday I would get married and have kids,” Aronin said. “That was never a question. When I was applying to residence, there was an article in Time or Newsweek on the first five women to become neurosurgeons. Of those five women, none of them had children.”

Plastic surgeon Jennifer Walden said though her journey to becoming a doctor was difficult, she believes anyone with persistence and the motivation to help others can succeed.

“You can do it all, don’t let anybody tell you you can’t, but it’s very hard,” Walden said. “If you’re in it for the money, it’s not the easiest way to make money.”

Even though Walden works in a male-dominated field, she said she often faces more criticism from her female coworkers than from male doctors.

“Sometimes you get a harder time by other women,” Walden said. “You might be scrutinized by the female secretary or nurse because they’re jealous. You’re scrutinized more, so you better do a better job. You better not call in late or say I’m sick and not coming to work.”

Kappa Rho, an all-girls premedical honor society that invited the women doctors to speak at its meeting, aims to offer support to female students at UT pursuing medicine, according to Pooja Prabhakar, a biology and economics senior and the chapter’s president.

“Our focus is on promoting females in medicine and empowering female leadership in community service and in networking in the Austin area,” Prabhakar said.

Aronin said the medical field has evolved drastically since she began her practice. She said more females pursue medicine now than ever.

“I can look back and say I’ve been doing this since 1983, 30 years, that what I see in terms of evolution of women in medicine has [exponentially] exploded,” Aronin said. “Now I don’t think people blink about the thought of women being in anything.”