Longhorns hang on to beat Commodores, 70-64 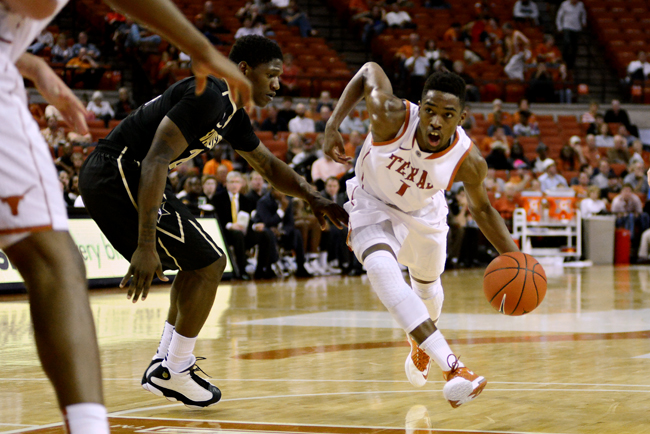 Despite some poor shooting, Texas’ balanced scoring attack did just enough to beat Vanderbilt on Monday night, knocking off the Commodores 70-64 in the Big 12/SEC Challenge.

Four different Longhorns scored in double figures in the victory, led by freshman point guard Isaiah Taylor, who had 14 points.

“Isaiah’s tough,” head coach Rick Barnes said. “I like guys who can take it when I get on them and move on, and Isaiah does that.”

The squirrelly point guard managed the offense well, tallying eight assists while turning the ball over only twice.

“We always want to establish our big men so my goal was to feed them throughout the game,” Taylor said. “They were able to run the floor and some of those passes were wide, open dump-ins, so I was just feeding them easy buckets.”

The Longhorns held on to its lead the whole way, growing the lead to as many as 12 points late in the first half. Vanderbilt chipped away throughout the second half and some poor shooting from the free throw line nearly cost the Longhorns the game, as Vanderbilt closed the gap to one point with 34 seconds remaining.

“The free throw shooting is all about routine,” Barnes said. “Down the stretch these guys were getting away from the routine, which caused some of those misses. They just have to go through their routine and live with the results.”