Longhorns should pay attention to the Travis County judge’s race 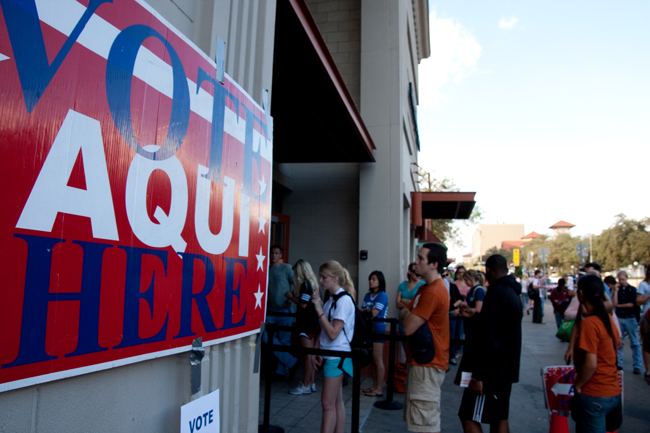 Students line up on Guadalupe to vote in the 2008 presidential election. A proposed Texas voter ID law that would have required voters to present a government-issued form of identification in this years election was denied by a U.S. District Court yesterday. (Daily Texan file photo)

The University Democrats held an event to discuss the future of women and politics in government in early November. Among the featured speakers was Sarah Eckhardt, a former Travis County commissioner who is now running for Travis County judge. While in the audience at the event, I heard two or three people say they were unaware of the Travis County judge’s race. The candidates for this position are Eckhardt and Andy Brown, former chair of the Travis County Democratic Party. The voting will take place March 4, 2014, but the campaign is already in full swing.

Now the candidates have to hope Travis County voters will turn out on election day. In the 2012 Democratic and Republican primaries in Travis County, 7.3 percent and 7.11 percent of registered voters participated in elections, respectively. This sorry state of affairs may owe itself in part to the county’s large student population. Many Longhorns know they will be moving on after graduation and thus form only weak bonds to their community.

But Longhorns have good reason to care about the outcome of this election. Whom voters choose matters to the UT community because of the county judge’s influence on local transportation decisions. The Travis County judge presides over the Travis County Commissioners Court, which oversees county services such as public transportation. Given the UT community’s reliance on Capital Metro and the shuttles, it behooves students to carefully consider the transportation-related planks of the candidates’ platforms.

According to Jim Wick, Brown’s campaign manager, “the county can do a lot when it comes to public transit.” Wick reiterated the idea of a commuter rail system that would run from Georgetown to south San Antonio. With the implementation of this “reliable mass transit, students might be able to live in a more affordable area of town,” Wick said. Eckhardt is currently the vice chair of the Capital Area Metropolitan Planning Organization. According to her campaign website, Eckhardt stands for “a more mobile future … for fair, efficient and affordable mix of sidewalks, bike lanes, buses, rail and roads are available to all as we move from home to work, school or play.”

Transportation issues directly affect students. Students should research the two candidates in order to pick the candidate who appears to have the best plan to address transportation issues on and off campus and strongest ideas for handling the mass influx of people moving into Central Texas. CapMetro and public transportation are vital to students, whether it be for going downtown or to an internship. UT students should rally to show support to the candidate who promises upkeep and improvement of our current system. Students in Travis County have voter power, if they choose to utilize it.