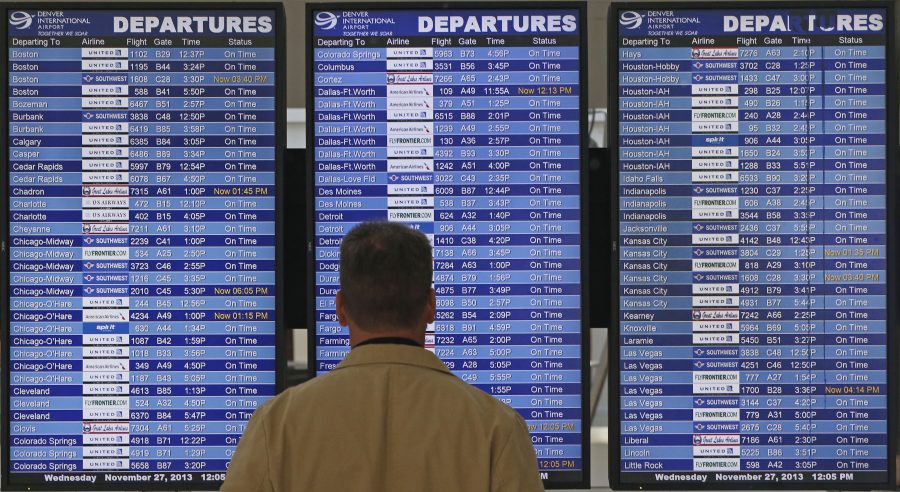 On the busiest travel day of the year, a passenger checks the departures board in a terminal at Denver International Airport, Wednesday, Nov. 27, 2013. More than 43 million people are to travel over the long holiday weekend, according to AAA.

As thousands of students prepare to fly home for the holidays once again, a business deal occurring this month could have a major effect on America’s airline industry for years to come. Less than a week from now, American Airlines and U.S. Airways will merge, becoming the world’s largest airline and ending a months-long legal drama between the airlines and the U.S. government. The merger is a major shake-up to the industry, for sure, but it remains to be seen to what degree the government’s fears of monopolies will be realized.

American and U.S. Airways first agreed to merge in February, but their plans were put on hold in August after the U.S. Department of Justice and the attorneys general of Texas, Arizona, Tennessee, Florida, Pennsylvania, Virginia and the District of Columbia filed a civil antitrust lawsuit against them. The DOJ argued in a statement that “even a small increase in the price of airline tickets, checked bags or flight change fees” as a result of the decreased level of competition “would result in hundreds of millions of dollars of harm to American consumers.”

In October, Texas Attorney General Greg Abbott withdrew from the lawsuit, possibly to avoid it being used against him by Democratic opponent Wendy Davis, who supports the merger, in the 2014 gubernatorial election. Only a month later, the DOJ settled with the two airlines, allowing the merger to go forward on the condition that the reorganized American Airlines Group give up some of its gate holdings, mainly at Ronald Reagan National Airport in Washington, D.C., and LaGuardia Airport in New York City.

On Dec. 9, the two airlines will sign the merger and officially combine.

Over the next few years, as the airline gradually consolidates its services, flyers should prepare for technical difficulties in the reservation systems, as well as the inescapable labor problems associated with the merger of two companies with more than 100,000 employees between them. For instance, the labor union representing U.S. Airways’ flight attendants and the union representing American Airlines’ flight attendants are still two completely separate entities, so the merger process will be far from over when the corporate executives put pen to paper next Monday.

The concerns over a potential monopoly, while valid, are confined mostly to the nonstop routes operated by only American and U.S. Airways — none of which fly to or from Austin. So any swift, direct impact on the price of your ticket home for Christmas appears unlikely.