Behind the scenes at Austin music venue Red 7 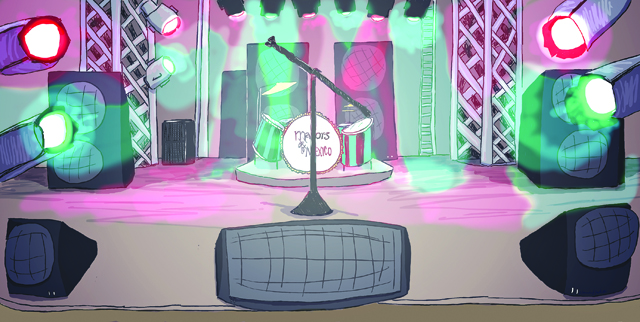 While many people stand in the audiences at the more than 250 music venues in Austin, few know the ins and outs that make Austin’s famous live music happen. The Daily Texan spoke with Red 7 club manager Joaquin Ramirez, stage manager Rob Glynn and sound engineer Joey Hook to understand how they prepare for a typical concert.

Prior to the day of the show

Transmission Entertainment handles most of the booking at Red 7, and a show is typically booked one to two months in advance. Once the band is booked, a promoter works on making all the arrangements with Red 7’s booking agent. The promoter works with the band to figure out the band’s payment, catering and set times. The stage plot is one of the most important steps of this process because it indicates how the band will be arranged on stage and what instruments the band will use.

Ramirez and the bartenders begin stocking the bar with cases of beer and liquor. MC Young, one of Red 7’s bartenders, says the bar takes anywhere from 30 to 45 minutes to set up and that his shift lasts anywhere from five to 10 hours, depending on the night. Tending bar at Red 7 differs from other venues because, as Young puts it, “the music changes everything.” Glynn types the set list for the night and the headlining band usually arrives at this time.

Glynn begins to set up the green room and cleaning the outdoor area, which can hold up to 500 people. First, Glynn checks all the lights. He gestures to the carpet on stage. “See those red stains?” Glynn asks. He turns down the red lights so the stains become more noticeable. “That’s pig’s blood.” The Swedish black metal band Watain was there in October, and their show included a pyrotechnic display as well as pouring pig’s blood everywhere. 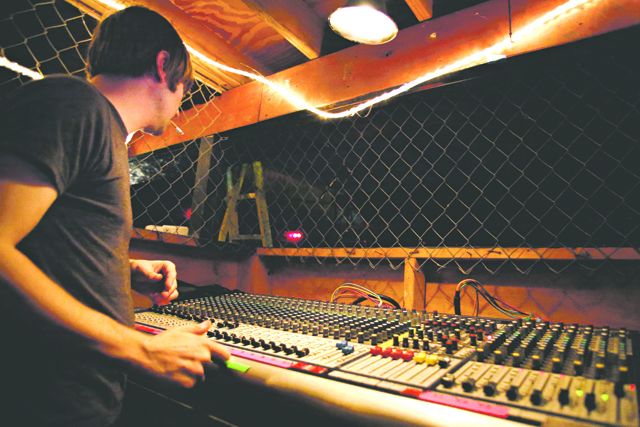 Audio engineer Andrew McCalla works at the sound booth while the stage is set up for the evening's performers. Photo Credit: Sam Ortega | Daily Texan Staff

Hook arrives to work on the sound. He undoes the previous show’s set-up and plugs in all of the microphones and cables. At the back of the venue is the sound booth where Hook monitors levels during the show. He tests the speakers with his iPod and describes the process as “a waiting game” until the bands are ready. He realizes one of the sound monitors is broken and explains that a big part of the job is fixing technical difficulties on the fly.

Hook begins sound check, during which they iron out problems or deal with unusual instruments such as harps or ukuleles. Glynn says the ideal set-up for Red 7 is a traditional rock band, but it depends how prepared the bands are. Hook says it is tempting to call hip-hop or electronic shows easier to set up, but challenges often arise. Rappers may want the monitor levels turned up loudly, and as they move, there can be high levels of feedback to monitor. 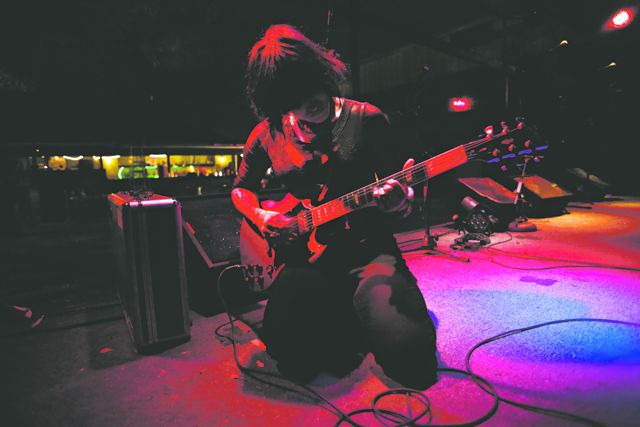 Hook listens closely to the music. But he’s listening for problems, not for enjoyment. Glynn keeps an eye on the microphones while also watching the crowd to make sure no one spills anything on equipment, which could be disastrous. When something does go wrong, Glynn must move swiftly to avoid interruption the set. Once, while running across the stage to fix a problem, Glynn got stuck behind the guitarist who sat on top of him for a while. Between sets, Hook and Glynn have only 15 minutes to break down and set up equipment, which both agree is barely enough time.

The cleanup process at Red 7 is fairly easy. By law, the venue has to close at 2 a.m. every night. The biggest issue for Glynn is to make sure the stage is clean and all the gear is accounted for. He takes inventory to make sure none of the bands left anything behind. The staff usually leaves around 3 a.m., closing down for the night. If they’ve succeeded, the audience will have no idea they were there.