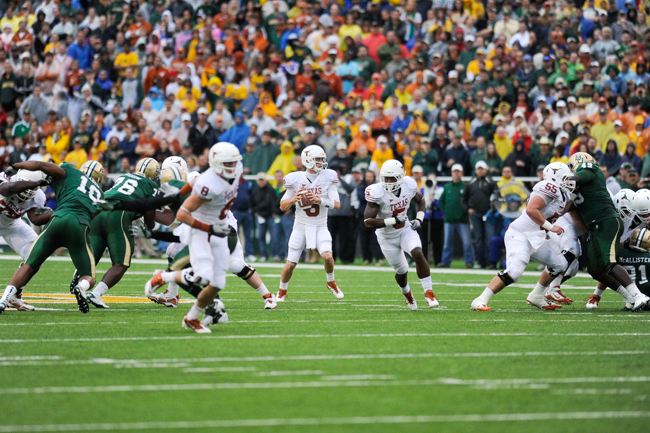 Years ago the walk into Floyd Casey Stadium meant one sure thing — a win.

Today, however, that guarantee is far from present. While in the past, Texas’ game against Baylor was played without much trepidation, on Saturday the Longhorns enter Waco with a chance to play for a Big 12 title — a thought many wouldn’t have associated with the Bears in past years.

“It is crazy,” senior quarterback Case McCoy said. “Baylor is one of those teams, but there’s several throughout college football. Just growing up as a football fan, it is different to see
them that way.”

Texas’ series with Baylor dates back to 1901, marking the third-longest series in school history. The Longhorns are a combined 74-24-4 against the Bears, with a 29-15-2 record in Waco.

Most games at Floyd Casey Stadium between Texas and Baylor brought a large amount of Longhorns fans and, on numerous occasions, it was considered another home game for the players in burnt orange.

But that has changed since Baylor has become a prominent football team. Especially since this season’s contest is the last to be played in the 63-year-old stadium, Baylor will be even more motivated to leverage its home-field advantage against
the Longhorns.

“We’ve had 25,000, 30,000 fans there,” head coach Mack Brown said. “But Baylor’s crowd is coming. They’ve done a good job of getting their own crowd. I’d say we’ll have our normal great Texas support, but it will probably be less than it has been in the past just because Baylor is selling more tickets.”

Baylor head coach Art Briles and his Bears have made a large transformation since current Longhorns watched Baylor growing up. The team has entered national recognition in the past few years and helped create another in-state rival for Texas.

“That’s not belittling Baylor,” senior offensive lineman Mason Walters said. “I don’t think [Texas] really had a lot of hesitancy going into that game. If you were to go up against a Baylor team that I grew up watching it’s nowhere near the same thing. As that program continues to get better and better its going to keep making great competition in the Big 12.”

For many of Texas’ seniors, this might be the biggest game of their career — a chance to end their underwhelming four years with a Big 12 championship against No. 9 Baylor and a chance to go to a BCS bowl if things work in their favor. That thought might have been unheard of when they first came to the 40 Acres, but now beating a 10-1 Bears team is what stands in their way of their final goal.

“They’ve done a tremendous job,” Brown said. “Art [Briles] has a great football team.  It’s a team that’s in the Top 10. It’s a team that’s playing before their largest crowd in the history of Floyd Casey Stadium.  Last game there. It’s for a championship. It’s a great challenge for us and our team.”