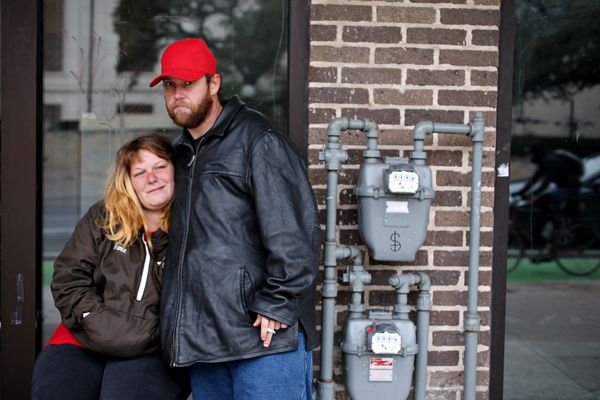 A recent report found that the homeless population in Texas, including in the Austin area, has declined in recent years. Although these general populations have been decreasing, the University does not specifically monitor the transient population that resides near campus.

According to a report by the U.S Department of Housing and Urban Development, the number of transients has decreased by 15 percent since 2010, but Texas transients still account for 5 percent of the population of U.S. transients.

UTPD Assistant Chief Terry McMahan said UT outlines no specific policy concerning transients. He said it is common for UTPD to make arrests for criminal trespassing, but the department is usually called if someone is making a disturbance, breaking a rule or if they seem to be hurt.

“We don’t deal with people on the basis of who they are,” McMahan said. “We go in with the mind-set that everyone is welcome to UT until they violate the law.”

Biology senior Lauren Gandy is co-chair of Hunger and Homelessness Outreach, a student organization that works directly with Austin transients. Gandy said since she joined the organization almost three years ago, she has noticed a decline in the transient population.

“On the Drag is where I can see some differences,” Gandy said. “I have seen fewer people in that area.”

Transient David Houston and his pregnant wife, Elizabeth Toner, live on Guadalupe Street. Houston said he agrees with data that suggests the number of homeless people have declined in Texas in recent years, but it is not because there are more resources for the homeless population. Houston said more people are dying from the adverse weather conditions.

Houston said he has lived in the area for more than eight years, but he has not had any contact with student organizations.

“We haven’t seen any of [the student organizations] come down here and try to help us,” Houston said.

Houston said it is difficult to find a bathroom for him or his wife to use. Houston said he has tried to use campus restrooms twice, including at the Union, but was forcibly removed from the building.

Transients are free to use the bathrooms on campus if buildings are open, McMahan said.

“The colder weather does induce people to come into warmer areas,” McMahan said.

McMahan said the department has a limited number of resources, so they look for things that are out of place. He said although the public is allowed on campus, if someone does not “have a purpose” for being on campus and is causing a disruption, UTPD may ask the person to leave. When asked, McMahan said the appropriate UTPD reponse is determined on a case-by-case basis.

“Sometimes we’ll catch people sleeping in buildings,” McMahan said. “The business of the public is not to sleep on campus.”