Texas defense preapring for toughest test yet this season 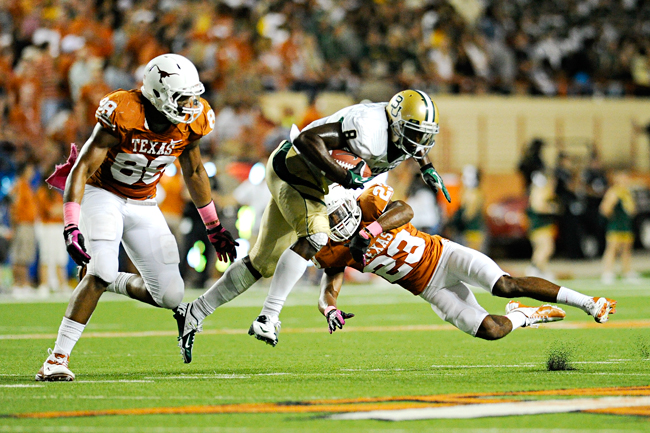 The Longhorns seemed to have an answer for everything Texas Tech’s top-ranked aerial attack threw at them last Thursday.

Texas racked up a season-high nine sacks while holding the Red Raiders to roughly 100 passing yards below their season average. This week, the Longhorns face an even tougher test against Baylor’s high-powered offense and senior safety Adrian Phillips knows Texas must replicate its defensive performance on Saturday for a chance to slow down the Bears.

“We need to do the same this week,” Phillips said. ”Baylor has a great passing game, they have a great running game and we just have to be on top of it. The defense knows that, to have any chance of winning this game, we have to keep them out of our end zone.”

Baylor boasts college football’s most potent offense, leading the nation with 55.4 points per game while eclipsing the 70-point plateau on four occasions. The Bears continue to break down opposing defenses with a balanced offensive attack, as they rank fourth in the nation with 365.9 passing yards per game and 11th with an average of 269.2 yards on the ground.

At the forefront of the Baylor offense is junior quarterback Bryce Petty, a Heisman hopeful for much of the season. Petty racked up 3,557 passing yards and 28 touchdowns against just two interceptions in his first 11 games while adding 11 touchdowns on the ground.

Junior defensive end Cedric Reed believes the key to the game for the Texas defense is simple.

“Get after the quarterback,” Reed said. “These teams with the spread offense, the system is run through their quarterbacks. Once the quarterback loses confidence and you hit him a few times, everyone else will fall.”

The Longhorns must account for more than just Petty, though, as Baylor’s impressive stable of running backs continue to put up prolific numbers as well. Junior running back Lache Seastrunk leads the way with 982 rushing yards on 126 attempts, an average of 7.8 yards per carry, while freshman Shock Linwood isn’t far behind with 848 yards on the ground.

Senior cornerback Carrington Byndom realizes Baylor’s offense is among the nation’s most balanced units, and he said its up to the players to execute on every play.

“You just gotta stay on your keys,” Byndom said. “That’s something with any team with a dual threat quarterback that has the explosive power to throw the ball or to run the ball.”

Byndom furthered this, saying the Longhorns must continue to limit big plays in order to keep Baylor from racking up quick scores as they have throughout the season.

“We’ve been doing a great job of eliminating big plays for touchdowns this year, and something that Baylor does a really good job of is striking quick,” Byndom said. “They’ve had a lot of big plays throughout the year, and I think another thing for us is keeping those big plays of the board.”

The Bears enter Saturday’s game coming off of a pair of shaky performances, suffering a blowout loss to Oklahoma State two weeks ago before narrowly beating a 4-7 TCU team by three points in their last game. Despite this, the Longhorns know how dangerous Baylor’s offense can be, and their defense needs to be at its best to keep the Bears off the board and give Texas a chance to win.