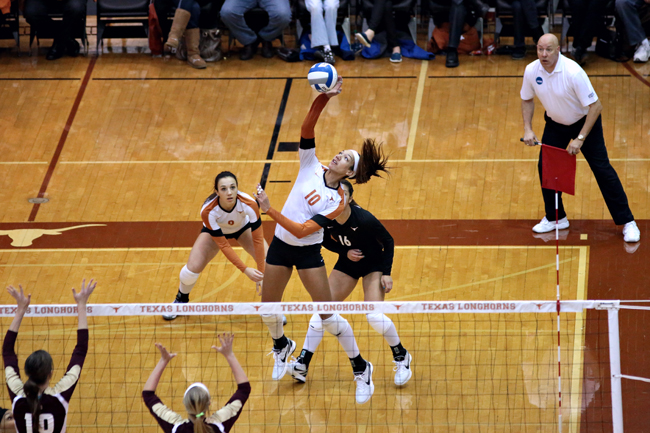 The top-seeded Longhorns swept Texas State (25-13, 26-24, 25-16) in the NCAA tournament opener in front of a sold out Gregory Gym. Despite the final score, it didn’t feel like a sweep. Texas State’s quick, low-to-the tape offense countered Texas’ high-ball, power game.

“I was impressed with Texas State,” head coach Jerritt Elliott said. “They played well and put us on our heels. I’m happy we responded and bounced back, though.”

The Longhorns (24-2) started off strong, killing nine of their first 13 attempts to open a 13-5 advantage — one Texas State (24-13) could not come back from. With five kills from junior All-American outside Haley Eckerman and four from the senior setter Hannah Allison, the Longhorns made it look as though it would be a quick match. Texas State struggled a hitting and finished at -.031 hitting percentage, with more errors than kills — Texas hit .429.

Texas kept the momentum rolling in the second game with a 7-1 run sparked by junior middle blocker Khat Bell’s two kills and two aces. As Texas opened the lead to eleven, Texas State turned on the jets, going on an 19-8 run to even the score at 21. The two went back and forth until the score was even at 24. Texas’ other All-American, outside hitter Bailey Webster, put the game and the Texas State threat away with
back-to-back kills.

“We let up a little and didn’t finish the right way,” Eckerman said.

“Individual players were trying to do too much,” Elliott said. “We were a little erratic. But after the time-out, we trusted our system and went on a run to close the game.”

Texas State kept its momentum rolling into Game 3, opening up an 8-4 advantage. But in the end, the power game of Texas proved to be too much. Eckerman and Webster simply out jumped the Texas State defenders. The pair combined for 75 of the 110 attempts in the match. Texas closed on a 13-4 run.

The Longhorns continue their road to Seattle against former rival Texas A&M (19-11), who took down UTSA in straight sets just before the Texas game. Texas A&M finished seventh in the SEC and is a rematch of last year’s round of 32, in which Texas won 3-1. The game will be at 7 p.m. in Gregory Gym.

“Every team is here for a reason,” Webster said. “We will get everybody’s best effort.”