Texas volleyball advances to Sweet 16 after knocking off A&M 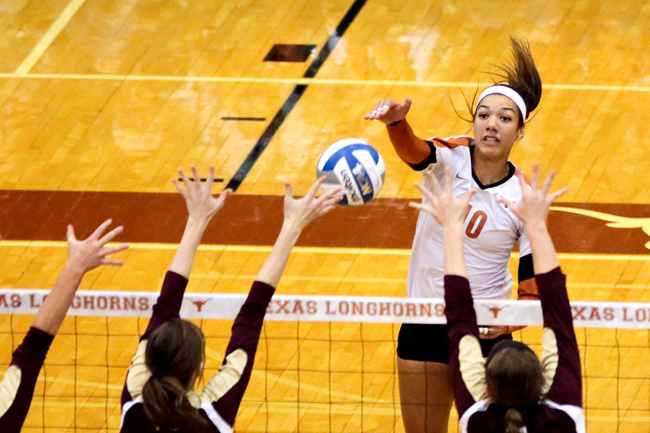 For the eighth straight year, the Longhorns have advanced to the NCAA regional, or round of 16, after knocking off Texas A&M (25-14, 25-18, 15-25, 25-19) Friday evening in Gregory Gym.  While Texas State’s quick-tempo offense avoided the Texas block in the first round, the Aggies couldn’t find their away around Texas’ front line, who recorded a season-high 18.5 blocks in the match.

“We’re not used to going up against Bailey [Webster] who touches 17 feet,” A&M middle Sierra Patrick joked. “They are supposed to block us. They are massive.”

Four of the seven first game blocks came in the match’s first 12 points, helping Texas jump to a 9-3 advantage. Senior setter Hannah Allison also started the match spreading the ball more than against Texas State where 75 of the 110 sets went to All-American outsides Haley Eckerman and Bailey Webster. With better ball movement came better results as Texas swung a season-best .684 in the first set.

“Film refreshed our minds a bit,” junior middle Khat Bell, who recorded eight blocks in the match, said. “We were feeling it from the start.”

Texas’ ability to put the ball away didn’t carry into the second match as A&M was able to hang around. The Longhorns had the same amount of kills—14—as they did in the first set, but needed 28 more attempts. However, A&M’s inability to put balls away and nine errors, led to Texas going on a 13-5 run to close the match.

Texas’ sluggish played continued into the third set, where poor passing and eight hitting errors, led to A&M crushing the Longhorns by ten points, their second worst set of the year.

“We broke down passing while having some bad swings offensively,” head coach Jerritt Elliott said. “We had eight hitting errors. And on the flip side, the Aggies played well.”

The Aggies kept the momentum rolling into the fourth set, opening a 6-3 lead. Led by Webster and the Texas block, though, the Longhorns went on a 6-1 run to open a 9-7 advantage; they wouldn’t trail again. A 7-0 run pushed the Longhorns lead to 19-12, before they closed out the rival Aggies.

“We got back to the basics and starting playing our game.” Eckerman said.

Eckerman finished the night with 20 kills while Webster recorded 18 of her own. The Longhorns, who finished the night swinging .298, will continue their road to Seattle Dec. 10 in Lincoln, NE where they could potentially face No. 16 Duke and No. 8 Nebraska on their home court if they win their second round games Saturday.

“It was a battle,” Elliott said. “It’s hard to play a perfect match. They put pressure on us and I’m proud of how our team responded. No matter what seed you are, we don’t take this win for granted. It’s an honor to be in the round of 16.”