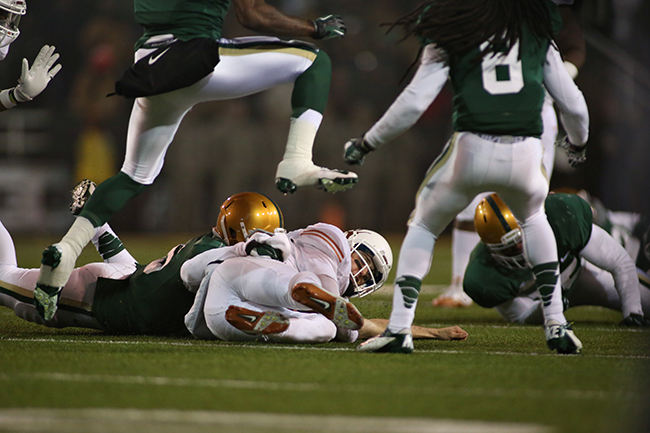 Texas’ 30-10 loss to Baylor ended the Longhorns’ hopes of a Big 12 title and a trip to the Fiesta Bowl. Here are four takeaways from Saturday’s loss to the Bears:

Texas failed to find a rhythm on offense throughout the game, managing just 217 total yards in the contest. The Longhorns earned just 12 first downs in the contest and struggled mightily on third down, converting on just 2-of-17 attempts.

Senior quarterback Case McCoy turned in arguably his worst performance of the season, completing just 12-of-36 passes for 54 yards, an average of 1.6 yards per attempt. He also threw a pair of interceptions.

“We didn't hit any passes,” head coach Mack Brown said. “We just weren't consistent on offense at all. It was just an ugly night for us offensively. I'm very disappointed.”

Defense scuffles in second half

After limiting Baylor’s top-ranked offense to just three points in the first two quarters, the Longhorns failed to maintain their stingy effort in the second half.

Junior quarterback Bryce Petty threw touchdown passes on each of Baylor’s first two possessions in the half, with the Bears adding a field goal on their third drive of the third quarter.

After managing 62 rushing yards in the first half, Baylor exploded with 159 yards on the ground after halftime. The Bears also improved their third down offense considerably in the second half, converting on 6-of-11 attempts after going just 1-of-8 in the first half.

“You have to give (Baylor) credit,” senior defensive end Jackson Jeffcoat said. “They came in the second half and made adjustments and plays.”

Saturday’s loss was especially tough for the Texas seniors, as it marked their final opportunity to win a conference title at Texas.

Texas controlled its own destiny for a Big 12 championship going into its matchup with Baylor thanks to Oklahoma’s 33-24 upset win over Oklahoma State earlier in the day. Texas finished conference play at 7-2, with its lone losses coming against Oklahoma State and Baylor.

Seniors like McCoy and Jeffcoat maintained their goal of a conference title, and they were admittedly upset that they were unable to clinch the championship after coming so close.

It's disappointing for the seniors who played for this team and the coaches,” McCoy said. “It's a hard loss to take when it was so close. It was something we fought for and worked for to get to this point. It's just a disappointing feeling.”

The game marked Brown’s second consecutive 100-yard rushing performance and his fourth of the season. He finished just four yards shy of his career-high, which he set as a freshman against Oklahoma State in 2011.

Brown also led Texas with four receptions for 19 yards, and he accounted for the Longhorns’ lone touchdown with a 2-yard catch in the fourth quarter.