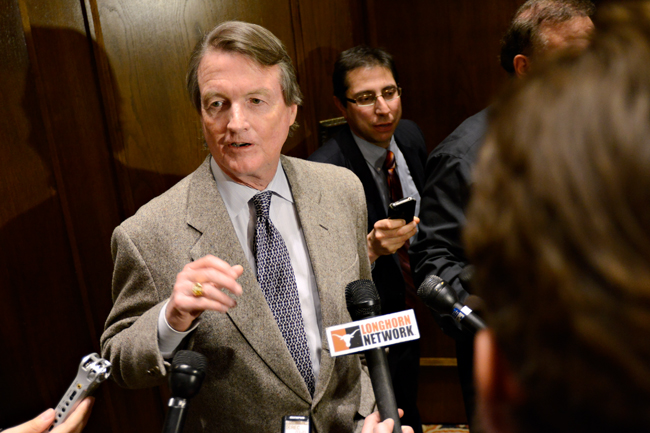 In a UT System Board of Regents meeting Thursday, Chancellor Francisco Cigarroa recommended President William Powers Jr. remain in office, despite describing the current relationship between Powers and the UT System as “strained.”

After the meeting, Powers said he was appreciative of the chancellor’s support but declined to comment on rumors that head coach Mack Brown will be replaced by Nick Saban, current head football coach at the University of Alabama. Powers, who has supported Brown in the past, makes hiring and firing decisions alongside recently-hired athletic director Steve Patterson.

“We’ll discuss football at the appropriate time,” Powers said after the board meeting.

UT spokesman Gary Susswein said a meeting between Powers, Brown and Patterson will occur in a “short period of time.”

Brown denied circulating reports that he is stepping down as head football coach at a press conference Thursday for the upcoming Alamo Bowl, stating his “situation has not changed.”

Cigarroa said a primary source of tension between Powers and the system was an inconsistency between Powers’ public and private statements to the chancellor and others.

“The main reason for the strain is that Bill and I would agree on certain principles and then I would act on those principles but then Bill Powers would often convey a message of misalignment, leading to conflict between UT system administration and the University of Texas at Austin,” Cigarroa said.

Cigarroa said it was clear Powers has enormous support from faculty members, graduate and undergraduate students and alumni.

“There exists strong faculty, undergraduate and graduate student support for President Powers, represented by three resolutions of support by each group. There exists strong alumni support for President Powers,” Cigarroa said. “The alumni and the University of Texas at Austin staff and the development board are working exceptionally hard and are in reach of achieving the $3 billion capital campaign call by August of 2014.”

Cigarroa also said he was aware that firing Powers might diminish the University’s ability to hire other administrators.

“[The president and provost] are making great progress in the hiring of a dean of the Dell School of Medicine,” Cigarroa said. “I’ve also been told that a change of leadership in this moment would jeopardize recruitment of an outstanding dean, as well as other important leaders.”

“I do appreciate, as I’ve said before, the chancellor’s support, the chairman's support, and I very, very much look forward to working on moving our University going ahead,” Powers said.

Cigarroa said he is hopeful of a “brighter horizon” in the relationship with Powers that he acknowledges has its problems.

"It is my full expectation that together, President Powers and I will work towards resolving them and moving ahead,” Cigarroa said.

Board chairman Paul Foster said he hoped the System and University would be able to move on from the tensions of the past few months. Currently, Regent Wallace Hall is under investigation by the House Select Committee on Transparency for allegations that he “overstepped his role” as a regent. Cigarroa and Powers have both been subpoenaed to testify later this month.

“I’m optimistic about the future of UT Austin, and I’m confident all this controversy will soon be a distant memory,” Foster said.

Student Government president Horacio Villarreal said he was happy with the chancellor’s announcement of support, despite the stress he experienced during the prolonged meeting. The regents’ closed executive session, which was scheduled to last until 2:00 PM, went on for almost two extra hours before re-opening at 4:00 PM.

“Obviously, I’m incredibly pleased and overwhelmed,” Villarreal said. “The fact that we waited for a while as [the regents] stayed in executive session, talking for quite some time, had us a little bit on edge — but the fact that we do have support from the chancellor is absolutely incredible.”

Relations between Powers and certain members of the board, including Hall, Alex Cranberg and Gene Powell have been tense for several years.

At a meeting in March, amidst conflict involving the UT School of Law’s forgivable loan program, Regent Steven Hicks said he would prefer the board address Powers' employment status directly, if that was the true motivation regents had for continuing investigations into the program.

“It would be simpler to me, instead of spending the money [to continue an additional, external investigation],” Hicks said at the meeting. “If that’s the real goal, let’s just put that on the table and deal with it.”

At that meeting, in a 4-3 vote, the Board of Regents decided to begin a new external review of the UT Law School Foundation’s relationship to the School of Law. In 2011, Powers asked Larry Sager, then dean of the School of Law, to resign after it was revealed Sager received a $500,000 forgivable loan as part of a program administered by the Foundation. Though Hall maintained Powers knew about the loan program while it was ongoing, Powers firmly denied his knowledge.

“Any implication that what occurred today is about not being transparent or forthcoming with information to the System, or perhaps to the Regents, is simply false,” Powers said in March.

Ultimately, after requests from several legislators, the Regents voted to allow the Texas Attorney General to conduct an additional investigation, rather than proceeding with the $500,000 external investigation.

Tensions have also impacted day-to-day operations at the University. In August, the University announced Greg Fenves, dean of the Cockrell School of Engineering, would replace outgoing provost Steven Leslie after a smaller and faster job search than is typical for a high-level position, largely as a result of “instability on campus,” Powers said.

“The process of going about looking for a provost with a full, natural search, or normal committee, will be difficult to do,” Powers said at a Faculty Council meeting in March. “We’re in a tricky situation.”

Alan Friedman, an English professor and a former Faculty Council chairman who has worked at the University since 1964, told The Texan in April that he feels the board’s actions have an impact on faculty morale and decision-making.

“There is a good deal of talk about what is happening on campus as a result of the regents’ actions, and some if it does factor into faculty members who are not staying or who are not coming,” Friedman said. “I think a lot of faculty members feel the campus is under siege from the very people who are appointed to protect and support the quality of the educational experience on this campus.”

Music professor Martha Hilley, who is past chair of the UT Faculty Council, was teary-eyed after the meeting adjourned.

“Other than the tears, I’m very hopeful,” Hilley laughed. “We’re going to [get to work] quickly.”