Google Glass to hold event in Austin to win over public 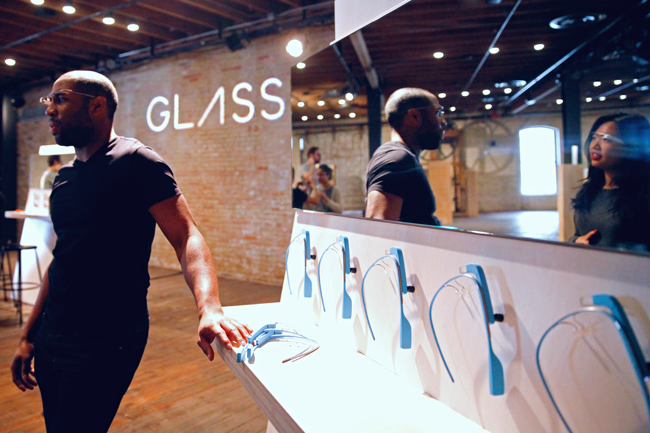 Glass Guides Emmanual Matthews and Laura Lim discuss Google Glass' features at the Austin Through Glass exposition on Thursday morning. The event will be open to the public this weekend.

Google Glass — Google’s wearable computer — will be available for the public to try in Austin on Saturday and Sunday.

Users can make calls, take pictures or video, get directions or use applications, or Glassware, for other functions. Currently, developers and consumers — called “explorers” — have been allowed to purchase a beta version of the device for $1500.

Anna Richardson White, Google Glass communications manager, said Google launched the Explorer Program so a variety of people could use Glass. White said Glass can replace a tablet or mobile device. Glass chose explorers in a variety of ways, including reaching out to developers and launching the “If I Had Glass” contest, in which contestants wrote in 50 words or fewer what they would use Glass to do.

According to White, Google is continuing to promote Glass by visiting approximately one city per month and announcing the next destination a week before they arrive. White said Google came to Austin because it is an academic and technology-oriented city.

“Austin is such a hotbed of technology and innovation, so it seems like you guys are in the right place,” White said. “The promise and future of technology here is unlimited.”

“We’ve seen some teachers use it in various areas of the classroom,” White said. “One really interesting case is this idea kind of like virtual teaching.”

White said one professor traveled to Cern, Switzerland and did a Google Hangout with his physics class in Michigan while he biked through a hydrogen collider.

“He could have been taped or taken photo of but they had a real-time view of what he was seeing,” White said. “It’s definitely more of a first-person perspective.”

White said some people are concerned with privacy and security issues. She said Google has been working with security companies like Lookout to resolve potential security hacks. She also said Google first released Glass to developers to find its vulnerabilities and fix them before releasing the product to the public.

“There are a lot of people who have bought glass who — as you’re always going to have in Beta — who are very conceited or very protective about it,” Schimtz said.

Schmitz said no one has ever gotten angry with him for wearing Glass or approached him to ask him to stop recording them.

Schmitz said the biggest myth about Glass is users can use it to record people without them knowing.

“Right now, [we’re] in a world where all you see is news articles saying, ‘Yeah, you’re always recording,’ even though you can always tell with it’s on,” Schmitz said.

Explorer Amy Langton said she works for a company that sells pharmaceutical products, and she is not allowed to wear Glass in doctor’s offices because people may feel like their privacy is being invaded

Langton said people often have misconceptions about how Glass can be used.

“People think you’re automatically scanning them like, ‘Are you on my Facebook page right now?’” Langton said. “No, I’d have to want to.”

White said Google has not released an official release date for Glass, but it will be available for purchase by the general public sometime in 2014. Glass will be available for the public in Austin to try on Saturday and Sunday at Bazos Hall, 204 East 4th St. from 10 a.m. to 4 p.m. Attendants must register to attend at austinthroughglass.splashthat.com.