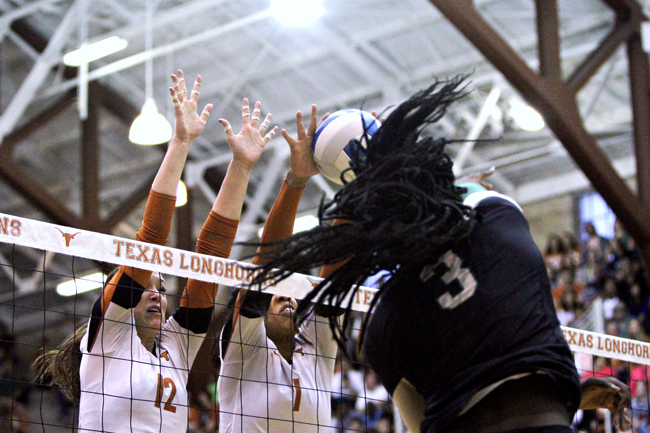 The Longhorns (26-2) started slow as American proved they belonged with the powerhouses by taking the first game. After staving off two American match points, the Longhorns committed consecutive errors — a service error followed by a hitting error — to give American (34-3) the match. Their up-tempo pace kept the Longhorn block away, as they outhit the Longhorns .220-.208.  Senior Bailey Webster and junior Haley Eckerman, All-American outside hitters, were kept quiet, while junior middle blocker Khat Bell kept the Longhorns close.

But the Longhorns turned the match around with a dominating second set. They jumped out to a 9-3 advantage and never looked back. While nearly every Longhorns hitter began putting the ball away, Eckerman’s struggles continued as she ended hitting below .200 for the match. As a team, the Longhorns hit .444, committing only two hitting errors. They then began to figure out the American attack and racking up the blocks.

The momentum continued to roll for the Longhorns as they came back from an early 4-1 deficit in set three. A 12-3 run for the Longhorns gave them a lead wouldn’t surrender. For the second straight game, American struggled to stop the Texas attack while getting blocked on many attempts. Texas swung .361, while they killed just 10 shots in 38 attempts.

American hung around in set four, but Webster and  Chiaka Ogbogu, Big 12 Freshman of the Year, proved too much, as they advanced to the Elite Eight, where they will face the winner of Nebraska vs. San Diego.

The big spark came from the Longhorn block, though. They ended with 14 blocks, led by Bell’s 3.5.

Texas will continue tomorrow against the winner of Nebraska and San Diego at 8 p.m in Lincoln, Neb.