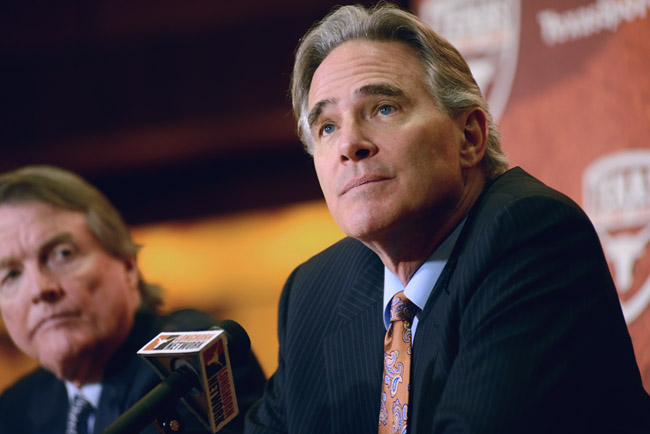 Patterson and Powers will soon embark on a thorough coaching search, seeking a coach who fits the Longhorns’ criteria and can advance the foundation Brown laid in Austin.

“Mack would always shun talking about his legacy,” Powers said. “It’s an unbelievable legacy. This is a transition away from one of the greatest coaches of all time.”

Brown will move into a consultant’s role under Powers, where he will assist the university in an undetermined fashion.

The 62-year-old former head coach made it clear he would not be a part of the hiring process for Texas' next coach. Brown said he would only provide his input if Powers or Patterson asked.

Patterson said he had not spoken to anybody about replacing Brown yet. But he listed of a number of factors he considered paramount in the Longhorns’ next head man. He wants a coach with the ability to handle scrutiny, recruit at the highest level and manage graduation rates. But most importantly, Patterson emphasized the necessity of winning.

“The key is setting the criteria, getting some clarity around that,” Patterson said.

The first-year AD also made it clear any coach he would hire needs college football coaching experience.

“College football is a different enterprise than the NFL,” Patterson said. “There are far different requirements. I think whoever is going to coach here needs extensive college experience.”

Powers spent much of the press conference complimenting Brown’s integrity, and stressed the necessity of this attribute for Texas’ next head coach.

“This is a very visible institution,” Powers said. “Honesty, what [Brown] said you can take to the bank. I think that is a skill any college coach needs to have.”

Patterson did not put a timetable on the coaching search. Patterson said he had not thought about who the next coach could be, and he would take his time with the process. He also stated the university had not decided whether it would hire a search committee to assist with the procedure.

Patterson also stressed the need to keep the hiring process quiet and out of the media.

“I think that’s the only successful way to have a search process,” Patterson said. “At the end of the day, there’s been a lot malarkey in the press over the last couple of weeks…. I think you have to have the ability to have a private conversation.”

Powers insisted that it would be Patterson, not he or Texas’ board of regents, making the hiring decision.

“Athletics is not my field,” Powers said. “We will talk together and consult and we’ll sit down and go through the process. But Steve Patterson will hire the next head coach.”

Powers also insisted the regents did not play a part in Brown stepping down, nor will they help decide the Longhorns’ next coaching hire.

“I was not given any direction at all from any regent on this issue,” Powers said. “ I was told by regents, ‘We don’t hire the coaches.’”