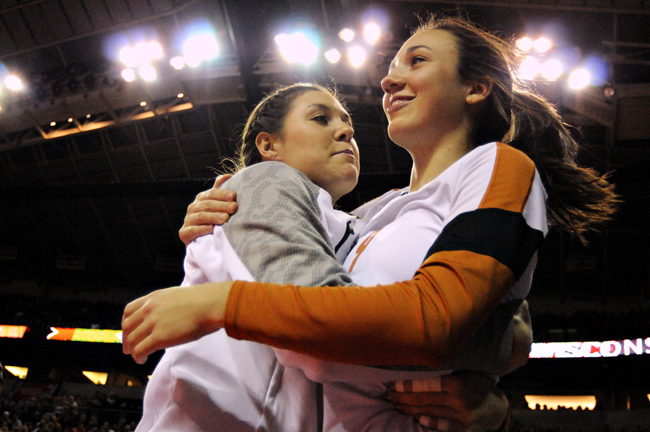 Seattle, Wash. — It was a shocking end to a great season. The buzz around Key Arena during the Final Four in Seattle centered around a Texas-Penn State rematch. So when the top-seeded Longhorns were upset by No. 12 Wisconsin, who finished fourth in the Big Ten, in four games Thursday, disappointment befell the players, fans and head coach Jerritt Elliott.

“I was shocked,” Elliott said on his team’s performance. “It was really tough way to end the season with our poorest performance to date."

But it’s impossible to call the season as a whole a disappointment. Texas dominated opponents the entire year, and there are plenty of great moments for the players to reflect on.

The Longhorns went on a 23-game win streak, which spanned more than three months. They finished undefeated in the Big 12 for the first time in program history, doing so without playing a decisive fifth set in 21 of the 23 straight wins. They knocked off, at the time, No. 2 Stanford and No. 1 Penn State in back-to-back games in front of what would become many sellout crowds that helped define Texas’ season.

It’s tough to compare this year to the previous season when the Longhorns won it all, but this team was just as good, if not better — the final result just wasn’t there.

Moving forward, Texas’ look will change. The career of energy-filled defensive specialist Megan Futch is at its end.

Senior setter Hannah Allison will move on, and it's likely freshman setter Chloe Collins will take over full time.

But the biggest loss will come on the outside for Texas, as senior Bailey Webster moves on after five years with the Longhorns. The former No. 1 overall recruit from Baltimore, Md., lived up to that billing. Webster was named Most Outstanding Player of last year’s tournament and has earned All-American honors. Sophomore outside hitters Amy Neal and Tiffany Baker, coming off a redshirt year, will compete for the spot.

International standout middle Mirta Baselovic will join sophomore Molly McCage and junior Khat Bell to form one of the more lethal middle-blocking tandems in the nation. The middle is stronger than ever.

Big 12 Freshman of the Year and second team All-American Chiaka Ogbogu, who was originally supposed to be redshirted, will only get better.

The injury redshirt Nicole Dalton, who played a big role on last year’s championship team, should be back and healthy.

Teams don’t make it to five Final Fours in six years on luck alone. This season may have ended in disappointment, but under the direction of Elliott, the future remains bright for Texas.