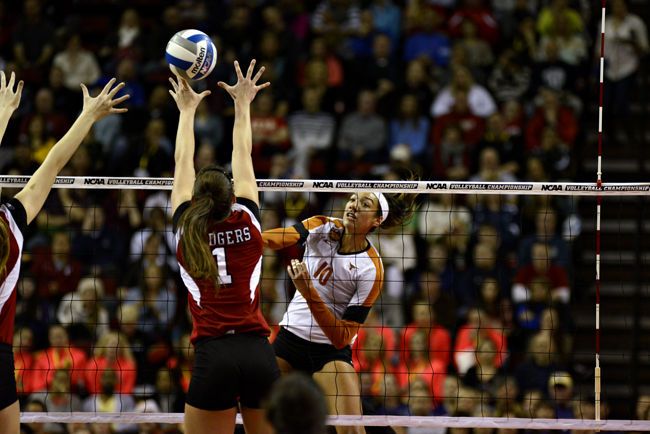 SEATTLE, Wash. — Earlier today The Daily Texan took a look at Texas' five keys to the game to beat Wisconsin in the Final Four. At the end of the night, No. 1 Texas lost to the 12th-ranked Badgers in four sets. So, what went wrong?

The Longhorns only found success in one of the five targeted areas. They could have gotten away with one or two, but four proved too costly.

This was the only one of the five keys the Longhorns in which succeeded. Chapman hit just .189 on 53 attempts. Texas’ block controlled the Wisconsin attack except for a few tools here and there. The Texas frontline recorded 19 blocks, a season high.

“Blocking was just about the only thing we did well,” head coach Jerritt Elliott said.

2) Be ready for Lauren Carlini

The Big Ten's Freshman of the Year completely outplayed the Longhorns' setters. Carlini recorded 50 assists and 12 digs. On the other hand, senior setter Hannah Allison  recorded just 33. Wisconsin head coach Kelly Sheffield called his setter one of the best in the nation.

Outside hitters senior Bailey Webster and junior Haley Eckerman both hit under .150. The low numbers are a little skewed by the poor passing on the Longhorns’ part, but the two All-Americans underperformed on the biggest stage. Sixty of the 147 attacks were by Eckerman, while Webster only had 27. The only hitter that did better than .300 was sophomore middle blocker Molly McCage (.385).

“They challenged us to hit other spots,” Eckerman said. “They did a good job adjusting.”

Seven aces allowed, two blocking errors, two handling errors, nine serve errors and 23 hitting errors combined for a total of 43 errors for the Longhorns. Texas did everything possible to prevent it from winning.

This is where Texas lost the game. The Longhorns were aced seven times. They had another nine service errors of their own. But, even more so than those two numbers, Texas’ inability to make good passes off the Badger serve cost it the game. Wisconsin’s serve kept Texas out of system the whole game, and the Longhorns couldn’t find a way to get through it.

“We were so out of sorts,” Elliott said. “We didn’t pass well. It’s a serve-and-pass game.”