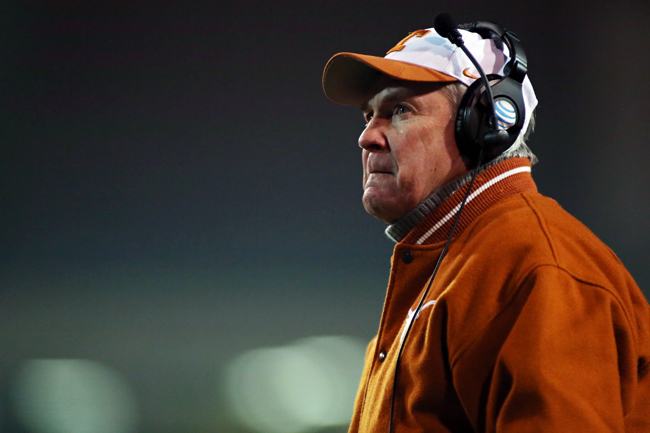 For the second straight year, Texas will make an appearance in San Antonio for the Valero Alamo Bowl. But this time the focus is fixed on head coach Mack Brown.

After announcing earlier this month that he would step down, the Longhorns look to finish Brown’s storied career at Texas with a victory against No. 10 Oregon.

The Longhorns (8-4) will face a difficult test in Oregon (10-2), which has been in the national spotlight since the beginning of the season. The Ducks, expected to be a national championship contender, have averaged 573 yards per game and a total of 75.4 plays per game.

“I know the preparation we put in week in, week out, that's not going to change going into this game.” McCoy said. “As we saw who we were playing, we were all in the film room the next day. This is a big game for us, no doubt about it, playing a top‑10 team that's well‑coached.  Five weeks ago they were in a hunt for the national championship.”

The Longhorns will conclude their season against the best quarterback they have faced all season. Marcus Mariota has completed 227 of his 360 passes and averaged 9.5 yards per passing attempt. In addition, Mariota’s ability to scramble adds another dimension to the Ducks’ option attack.

Texas has had difficulty with mobile quarterbacks, notably in losses against BYU and Ole Miss earlier this season. The Longhorns have missed 71 tackles this season — down from 112 they missed last season — and dual-threat quarterbacks have been a main source of those misses.

“This guy has good wheels,” said defensive coordinator Greg Robinson. “He can move around.  He can run the ball up the field.  But he can maneuver in the pocket, as well.  He's pretty good at trying to stay alive so he can chuck that ball downfield.”

Oregon will be a tough test to send off Brown with a win at the Alamo Bowl. But the team is prepared for Brown’s last stand.