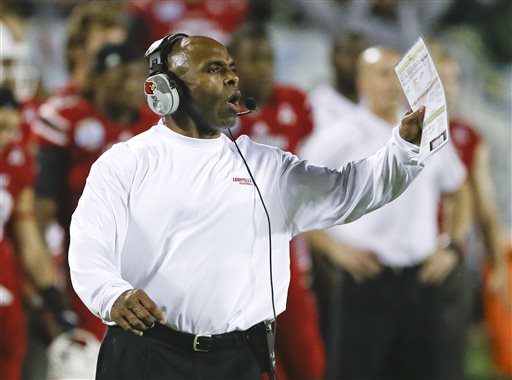 Update: 10:17 p.m.: Nearly a full day after the reports began circulating, it is official. Charlie Strong will leave Louisville to become Texas' next head coach, according to multiple reports.

Strong will be Texas' first black head coach in any of its three major sports.

Update: 11:29 a.m: Multiple reports have Charlie Strong and Texas in negotiations to be the Longhorns' next head coach, but Louisville's current head man has yet to decide.

Strong met with his assistant coaches Saturday morning, but the gathering has not immediately provided clarity on the situation. Multiple reports also state that Strong wants to meet with Louisville athletic director Tom Jurich, who is vacationing in Colorado, before making his decision. Strong's buyout, which is more than $4.3 million according to Sports Illustrated, is also a potential snag for Texas.

Sports Illustrated reports that the deal with Strong is for five years and around $25 million, slightly less than what Mack Brown earned in his final season.

The 53-year-old Strong was in a similar position last offseason when he appeared to accept a job at Tennessee. But a day later, after a meeting with Jurich, he changed his mind and returned to the Cardinals.

Strong would be the Longhorns' first black head coach in any of its three major sports — football, basketball or baseball.

Orignial: Texas has found its next head coach.

Louisville’s Charlie Strong and the Longhorns have agreed on a five-year contract worth around $5 million a season, according to a Sports Illustrated report.

The 53-year-old posted a 37-16 record in four seasons with the Cardinals, which included a Sugar Bowl upset over Florida last season. Strong will follow Mack Brown in Austin, who stepped down after 16 seasons following the Alamo Bowl.