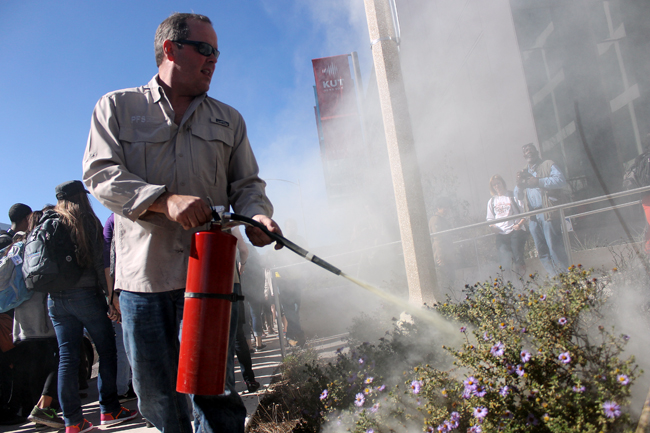 The Belo Center for New Media was evacuated Monday after a bush caught fire outside the building. The fire, which affected several bushes lining the sidewalk on Dean Keeton Street, did not appear to damage the building itself.

According to UTPD spokeswoman Cindy Posey, UTPD felt confident the fire was caused by a cigarette.

Bert Kivell, a private contractor for the University who was on the scene at the time, said he contained the fire using a fire extinguisher before emergency personnel arrived at the scene and put out the fire.

Students inside the building were directed to the street after the fire alarm sounded. They were asked to remain a safe distance away from the fire while it was being put out.

“I didn’t know the emergency procedure,” said Davina Bruno, a public relations senior who was inside the building at the time. “The alarm told us to leave the building, but [outside the building] was where the hazard was. I don’t know what they would have done if the situation got more serious.”

Arryn Zech, a barista at Cappy’s Cafe, which is located on the first floor of the Belo center, said students inside the building were confused and unaware of the specifics of the situation.

“I was honestly just following the masses [when evacuating],” Zech said. “My car was actually parked outside of the building and someone was saying that they thought a car was on fire, so I was worried about that.”