Following UT politics is hard, but it’s often the most difficult things that are worth doing — or in this case, worth watching. Below is the Daily Texan editorial board’s guide to the issues to watch at UT during the spring 2014 semester, a list we will continue in Tuesday’s paper. And, if you have more of your own to add, tweet them at us with the hashtag #Texanwatchlist.

On Dec. 12, after four and a half hours of closed-door discussion, the UT System Board of Regents refused to take action on the employment of President William Powers Jr., adding a new chapter to the nearly three-year-long battle between the president and the board. Given the personal turn the struggle has taken in recent years, with a state committee on transparency considering the impeachment of Regent Wallace Hall for overreaching his authority and the governor himself referring to those opposing the regents as “charlatans and peacocks,” the tense speech given by Chancellor Francisco Cigarroa, in which he accused Powers of misrepresenting the regents’ goals to those outside the situation, seemed about the best possible outcome.

“In this context, understanding that I am hopeful that this strained relationship can be improved, it is my recommendation that Bill Powers should continue his appointment as president of the University of Texas at Austin,” Cigarroa said.

Though Powers’ supporters were quick to declare a victory, there’s no indication that Powers will take Cigarroa’s advice to heart — or, for that matter, that Powers was any more guilty than the regents were of playing petty personal games at the expense of focusing on higher education policy. Granted, things are different this time around: Perry’s on his way out — though he might suggest he’s on to the presidency — meaning he can exert less influence through lasting appointments to the board. Powers, after years of fighting, may be just too damn tired to keep up the fight. And, with Mack Brown out, the insistent boosters rumored to be pressuring the regents to force Powers to oust his close friend or lose his own job are no longer an issue, if they were even one in the first place.

But the fate of Regent Wallace Hall has yet to be decided, leaving a gaping hole in the narrative. Though the transparency committee weighing Hall’s fate has no future meetings scheduled, it has asked the UT System to reply to a series of directives on the regents’ history of open records requests by Feb. 1.

But above all else, students should keep their eyes on this issue to see what happens if the powers that be stop lighting fires and allow the smoke to clear. When the fight between the regents and Powers started, the issues were educational in nature: how much to charge for tuition, how many students to put in a classroom, whether to fund online education expansion at the expense of on-campus initiatives. It’s only in the past year and a half that the struggle has devolved into arguments about the cost of open records requests and the influence politicians exert to get their children admitted to the University.

Beyond the constant personal fights, the UT System is still struggling to balance raising its prestige with providing affordable education to an ever-increasing number of willing students. Those issues are worth fighting for, and it’s high time our regents and our president returned their attention to the proper battle.

2. The fates of the two “first” black head coaches at UT 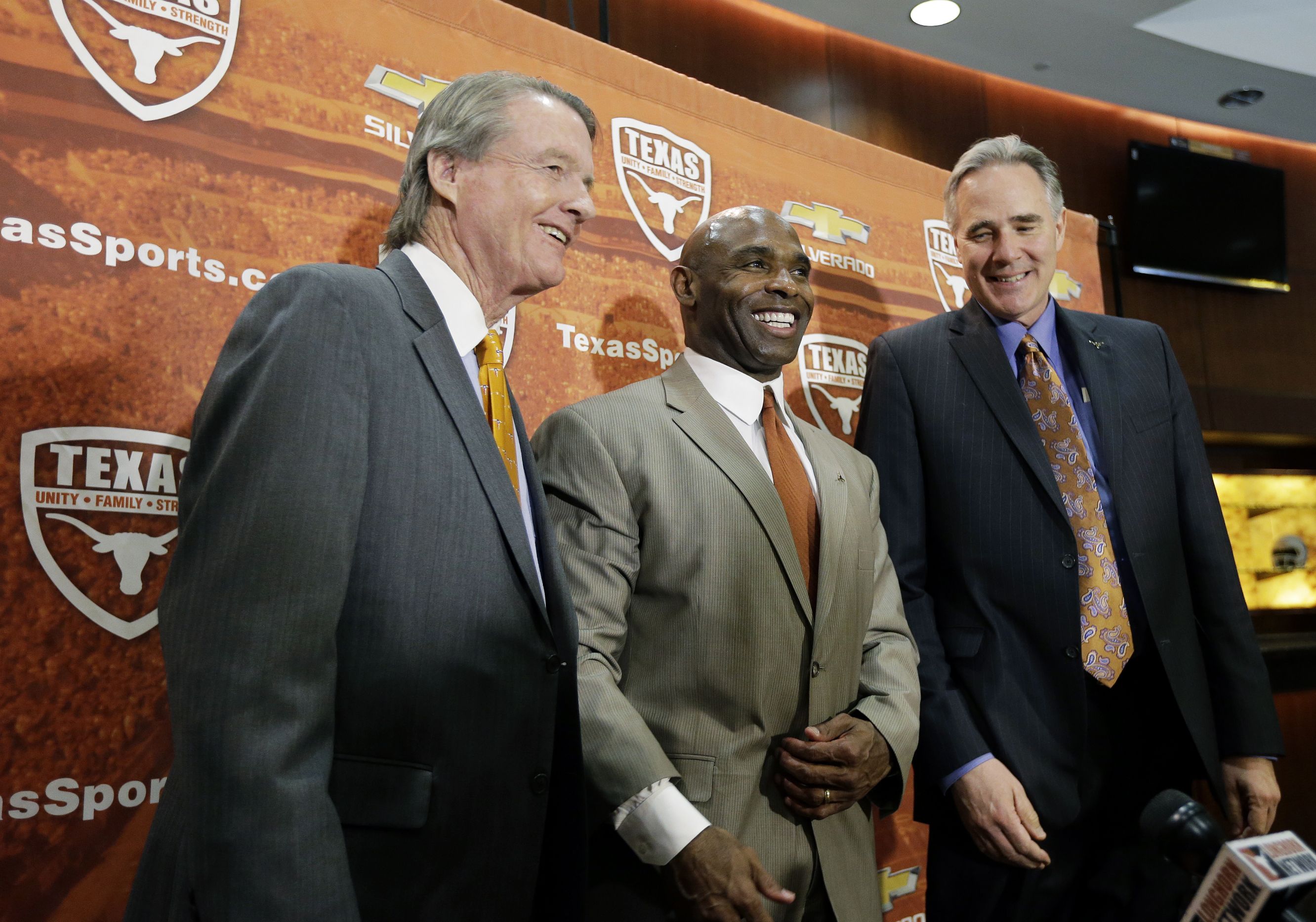 On Jan. 4, Charlie Strong accepted the position of UT’s head football coach, just under three weeks after Brown’s era ended when Brown stepped down from the position amid intense pressure from fans and pundits.

It’s no secret that Strong wasn’t the first choice for Texas: When asked on Dec. 12 if the Longhorns would be able to bring much-sought-after Alabama football coach Nick Saban to Texas, booster Red McCombs responded, “Oh, I don’t think there’s any question about getting him. Hell, all the money that’s not in the Vatican is up at UT.”

But that money failed to lure Saban to the land of burnt orange, and after several other rumored candidates, including Baylor’s Art Briles, publicly declared their disinterest, Strong accepted.

In a radio interview, McCombs called Strong’s hiring “a kick in the face.” McCombs has since apologized to Strong, but his statement is the clearest indication yet of the hurdles Strong may have to face to find success in his new position.

Unlike his predecessor, Strong is in no way part of the good-old-boys booster network that has traditionally supported Texas football. And, as many members of the media have pointed out, Strong doesn’t even look like them: Unlike most men of influence in Texas, Strong is black, making him the first black football coach in Texas’ history.

Strong, of course, isn’t technically the first black head coach in Texas history. That title goes to Bev Kearney, the former women’s track coach. Kearney filed a $1 million lawsuit against UT in November after she was removed from her position for having a relationship with a student. The Kearney case, with its ever-unraveling layers of potential race and gender discrimination, may cast a cloud over the progress that is Strong’s hiring. Any student with an interest in equality should keep a close watch on both of Texas’ “first” black head coaches.