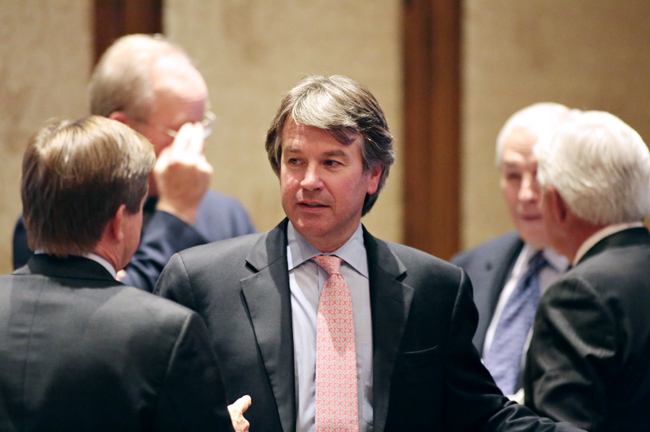 The House Select Committee on Transparency in State Agency Operations’ ongoing investigation seeks to determine whether Regent Wallace Hall overstepped his duties as a regent and whether he should be recommended for impeachment. Hall declined the committee’s invitation to testify and stated through his attorneys that he will only do so in the future if a subpoena is issued.

In a letter to UT System Chancellor Francisco Cigarroa, the committee investigating the actions of Regent Wallace Hall stated it will continue to “exercise its oversight authority” over the System even though testimonies for the investigation have concluded.

The House Select Committee on Transparency in State Agency Operations is trying to determine whether Hall overstepped his duties as a regent and whether he should be recommended for impeachment. Some accused Hall of conducting a “witch hunt” against President William Powers Jr. after he filed open records requests with the University for more than 800,000 pages of information. At a December meeting, the chancellor said he would not recommend Powers’ firing to the regents, despite the “tense relationship” between Powers and the regents.

The letter, written by State Reps. Carol Alvarado and Dan Flynn, co-chairs of the committee and sent at the end of last month, said there are no future hearings scheduled, but the committee will continue to monitor the System to observe the System’s responses to the investigation.

The committee’s letter listed seven directives, which consisted of requests for a variety of information, including a list of any open-records requests that will be filed by regents or System employees within the foreseeable future and several descriptions of how the System has changed — and plans to change — as a result of the investigation.

At the last hearing in December, the committee moved to have a report prepared, cataloging the findings of the investigation. The letter to Cigarroa said the directives are intended to “help the Committee as it works with counsel to produce a final report,” and stated “the report may be expanded to include additional information in the future.”

At one committee hearing in November, UT System lawyers testified Hall was mistakenly given access to private student information — possibly in violation of federal privacy acts — which he subsequently shared with his private attorney. At this hearing, Francie Frederick, general counsel to the UT System Board of Regents, said regents are only allowed to view documents with information protected by the Family Educational Rights and Privacy Act if they have a “legitimate
educational purpose.”

At the same hearing, State Rep. Trey Martinez Fischer, D-San Antonio, motioned to have Rusty Hardin, legal counsel to the committee, review Hall’s actions in sharing confidential documents and determine whether Hall committed a crime. At the last hearing in December, Hardin had not finished his review.

Powers testified at the final hearing in December, and estimated that Hall’s actions cost the University more than $1 million. Cigarroa testified the same day, and said Hall’s actions were incredibly disruptive and upsetting to several System employees.

Even though he is the subject of the committee’s investigation, Hall declined the invitation to testify, and said through his attorneys that he will only do so in the future if a subpoena is issued.

“Mr. Hall has said time and time again that he was anxious and more than willing to tell his side of the story,” Alvarado said at the last hearing. “I believe he could have provided this committee with matchless testimony that would have helped us set the record straight. Transparency requires cooperation. As my co-chair and I have stated, our invitation to Regent Hall to testify still stands.”