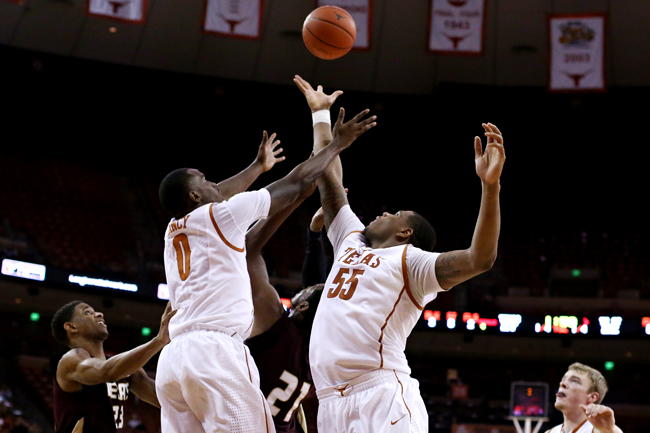 The Longhorns blitzed the Mountaineers with a 12-2 run at the end the first half to grab a 14-point lead they never relinquished en route to an 80-69 win in Morgantown, W.Va. on Monday night.

Texas (13-4, 2-2 Big 12) held a six-point lead with 4:09 remaining in the first half when it began to consistently attack the bucket. In the run, the Longhorns exploited their quickness and size advantage over West Virginia (10-7, 2-2 Big 12) as each of the team’s next 12 points came inside the paint or at the free-throw line.

The Longhorns’ biggest advantage over West Virginia was on the boards, where an undersized Mountaineer squad had a difficult time competing with the bulk and length of Texas’ frontcourt.

Before Monday night, the Mountaineers had outrebounded opponents by two boards a game. At home against the Longhorns, they were outrebounded 49-30, making it difficult for West Virginia to find second-chance attempts.

The Mountaineers, who rely heavily on the three to score, couldn’t find their touch behind the three-point line. West Virginia made only four of 25 attempts, well below their season average of 46 percent. The problem only intensified when Texas gained a large lead. The Mountaineers were forced to chuck up more deep balls in an attempt to make a comeback.

Texas played one of its most efficient offensive games of the season, shooting 52.7 percent from the field. The Longhorns shot only nine three-pointers on the night, tying their lowest attempt total on the season.

A late run by West Virginia made the game close in the final minutes, but the Mountaineers never cracked the 10-point barrier.

Taylor, the Longhorns’ starting point guard and spark plug, suffered an apparent hamstring injury midway through the second half and went to the locker room. But Taylor returned to action minutes later and played the remainder of the game without any visible discomfort.