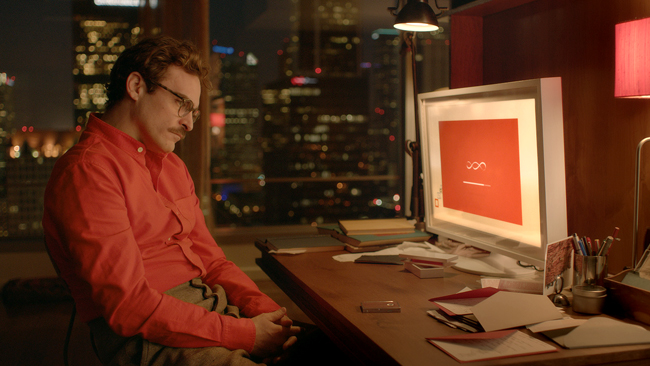 2013 was a year brimming with fantastic films that both entertained and resonated with audiences — so much so that the films of this year couldn’t be limited to a traditional top 10 list; a list of 10 simply won’t even scratch the surface. Even with 15, and another 10 honorable mentions, there are still another two dozen or so films worth mentioning, and that alone qualifies 2013 as one of the most impressive film years of our lifetimes as of yet.

The Daily Texan created a list of the top 15 films of 2013, starting with Spike Jonze’s unconventional, futuristic love story, “Her.”

2013 was a year of great love stories in film, with the authenticity of “The Spectacular Now,” the audacity of “Blue is the Warmest Color” and the bracing realism of “Before Midnight” all shining for their intimate portrayals of relationships. Spike Jonze’s “Her,” though, stands at the top. “Her” is an unconventional romance between a man and his computer executed with wit, heart and intelligence. Bolstered by a stunning duet of performances from Scarlett Johansson and Joaquin Phoenix, “Her” isn’t just a great movie; it’s the best film of 2013.

Jonze crafts a wholly plausible future in which operating systems have evolved far past Siri, programmed so effectively that they become sentient. The lonely, recently divorced Theodore (Phoenix) purchases one on a whim but is surprised when Samantha (Johansson) proves to be a vibrant, inquisitive presence, rather than a product. Despite the massive logical problems, the two fall in love, and, as Theodore wrestles with the concept of dating an invisible presence, Samantha’s thirst for life and knowledge threatens to overwhelm them both.

Samantha starts off as half computer and half therapist, but as she grows, so does the scope of Jonze’s thematic intentions. He gives insightful life to concepts easily taken for granted, such as memory or desire, and every one of Samantha’s discoveries feels like a layer of the human mind, peeled back and examined. Johansson’s purely vocal performance is astounding, and, removed from any physical screen time, Johansson gives her best performance yet. She conveys tenderness, joy and regret with previously untapped depth, and she plays off of Phoenix beautifully.

Phoenix, meanwhile, is quickly emerging as one of cinema’s great chameleons, able to completely immerse himself in any role given to him. His sensitive performance here is incredible, complementing a disembodied voice with wit and creating scenes that are not just believable but human and vital.

The rest of the women in Theodore’s life are equally well-cast. Amy Adams finishes off a great year of performances with a warm, uncharacteristically funny turn as a friend of Theodore. Rooney Mara, playing his ex-wife, gives a performance defined by its stark juxtapositions — loving and gentle when viewed through the rosy filter of memory yet complex and frustrated in reality and equally authentic in both modes. Olivia Wilde also shines in a short sequence as a wounded young woman set up on a blind date with Theodore.

Directing from his own script, Jonze brings a graceful, effortless intelligence to “Her,” and every sci-fi concept he introduces is creatively and thoughtfully explored. The future he creates is one that feels realistic but hopeful — every aspect of life a bit sleeker and warmer. The film’s central relationship, the tricky dynamic around which “Her” hinges, is a beautifully observed romance that uses the absurdity of its concept to get at some profound truths about the beginnings and endings of love. Also worth commending are the gorgeous cinematography from Hoyte Van Hoytema, blending the skylines of Los Angeles and Shanghai to create a beautiful metropolis, accompanied with a lovely score from Arcade Fire.

“Her” is a gamble: a film with a laughable concept that works thanks to a wholly honest execution, a script brimming with smart ideas and uniformly excellent, low-key performances. It’s a work of surprising creativity and shattering empathy, and it uses its high concept to tell a nakedly personal story packed with so much wisdom and feeling that it becomes universal. It’s hard to judge what a film’s legacy will be so close to its release, but, if there’s any justice in the world, “Her” will be regarded as a classic, a science-fiction film that wears its heart on its sleeve, and a relevant, heartfelt masterpiece.

The year’s most authentic romance perfectly captures the soaring highs and shattering lows of first love and growing up, anchored by two incredible performances from Miles Teller and Shailene Woodley. Teller, in particular, is fascinating, harnessing his character’s self-destructive impulses into a hurricane of boozy charisma, while Woodley’s unguarded vulnerability and warmth allow the two to build a tender, fragile intimacy. Supporting work from Bob Odenkirk, Brie Larson and Mary Elizabeth Winstead bring melancholy touches, but the movie’s most profoundly emotional moments come from these wounded, delicate kids finding something to love in each other.

Brie Larson’s natural, warm, perfectly calibrated performance as Grace, a supervisor in a halfway home for at-risk kids, is only the beginning of what’s great about “Short Term 12.” The film brings viewers into the lives of these kids and plays out with genuine emotion, effortlessly breaking our hearts with something as simple as a character detail clicking into place. Keith Stanfield, Kaitlyn Dever and John Gallagher Jr. all stand out in a stacked supporting cast, their arcs playing out with an eye for powerful moments that truly bring us into the characters’ psyches, each big scene hammering home what a fantastic, big-hearted film this is.

This is movie magic in its truest sense, taking Hollywood actors to space without ever leaving Earth. After Dr. Ryan Stone (Sandra Bullock) is set adrift in space, her struggle to survive makes for the year’s most essential cinematic experience, a dazzling advancement of technology that redefines what film can and can’t do. Director Alfonso Cuaron cultivates a consistent sense of panic, drawing both wonder and terror out of the depths of space. Bullock shines as a rookie astronaut in a horrible situation, while George Clooney is tailor-suited for the role of the unflappable veteran astronaut that helps her along.

It takes true fortitude for a filmmaker to turn the camera on themselves, but Sarah Polley did just that in “Stories We Tell,” a fascinating documentary that’s equal parts memoir and mystery. As Polley tries to find out who her true father is, she also unearths interesting, candid truths about her family and about storytelling in general. It’s a meticulously structured, nuanced and effortlessly wise work that not only tells the story of a family but even examines some of the underlying themes in Polley’s own work. “Stories We Tell” is a reflective documentary that never becomes self-impressed, but it does establish Polley as one of the most interesting filmmakers working today.

Julie Delpy, Ethan Hawke and Richard Linklater’s third installment in the “Before” trilogy finds Jesse and Celine’s relationship straining under the weight of a few years, and the collaboration between the three has never been stronger. Both characters are so completely realized by Hawke and Delpy that their performances barely register. These are real people who only happen to exist in celluloid. A lengthy argument between the two late in the film is one of the year’s most harrowing sequences, with Delpy turning in a bold, passionate performance and Hawke perfectly blending frustration and flippancy, before ending on a heart-warming, surprisingly optimistic note.

A perfect example of everyone involved in a film firing on all cylinders to make a spectacular, pointed critique of one of America’s self-assigned blind spots. This kinetic, wildly entertaining work from cinematic master Martin Scorsese condemns through staging moments of hilarious debauchery with stunning precision. Leonardo DiCaprio does the best work of his career as Belfort, including a spurt of physical comedy that will go down in the history books, but Jonah Hill comes stunningly close to stealing the show with his hilarious brand of improv.

The Coen Brothers are at their most melancholy with “Inside Llewyn Davis,” a quiet look at the folk scene of the 1960s. Oscar Isaac wholly embodies the lead character, effortlessly and perfectly bringing every frustration, regret and rare moment of self-awareness to life. John Goodman and Carey Mulligan are both suitably acidic as comedic foils the universe throws at Llewyn, and frequent musical collaborator T-Bone Burnett lends his talents to the year’s best soundtrack, a soulful collection of authentic folk songs as catchy as they are memorable.

A film about lifestyle more than characters, Harmony Korine’s “Spring Breakers” is the year’s most entertaining indictment. The woozy spring break plays like a half-formed memory at times, its disorienting dialogue and neon-drenched aesthetic coyly disguising its sharp critique of modern youth. James Franco has received lots of attention for his absolutely demented performance as Alien, a sleazy drug dealer who doubles as Korine’s thesis statement. He truly energizes the film, even lending his dulcet tones to a hilariously bizarre rendition of Britney Spears’ “Everytime” that gives the film its most memorable sequence.

This quietly horrifying account of America’s most despicable history is an undeniably vital film. Chiwetal Ejiofor gives the sort of soulful performance that defines careers, and Michael Fassbender, Sarah Paulson and newcomer Lupita Nyong’o all do essential, often painful but effective work. John Ridley’s script is equally strong, appropriate to its period setting but never antiquated, and Steve McQueen’s direction is perfectly measured, capturing the horrors of slavery without reveling in them and balancing its most painful moments with the smallest of triumphs.

A modern horror classic, “The Conjuring” is a masterpiece of craft, with each bone-chilling horror piece immaculately constructed and populated with likable characters. Patrick Wilson and Vera Farmiga nail the procedural elements of their ghost hunter characters, but it’s Lili Taylor’s battered performance as a haunted mother that gives the film heart and stakes.

For a melancholy rumination on adulthood and alcoholism, “The World’s End” is also a ton of fun. Simon Pegg’s manic performance grounds an impressive ensemble, but Nick Frost emerges the year’s most unlikely action hero once the film’s creative, challenging science fiction concerns come to the surface.

Jeff Nichols’ deliberate script and lush visuals made the familiar riveting again in his Southern-twanged coming-of-age story. Matthew McConaughey continues his rise to one of Hollywood’s best actors as a snaggletoothed fugitive, while Tye Sheridan perfectly embodies reluctantly fleeting innocence as the boy who agrees to help him.

Chan-wook Park’s American debut was a gleeful perversion of Hitchcock’s “Shadow of a Doubt,” an exhilarating visual puzzle with atmosphere to spare and some of the year’s most memorable images. Mia Wasikowska fearlessly comes into her own as a young girl struggling with her father’s death, while Matthew Goode chills as her predatory uncle.

It’s all about the performances in David O. Russell’s endlessly entertaining caper. Amy Adams leads an excellent cast with a performance of pure confidence, while Christian Bale and Bradley Cooper both do electric work and heat-seeking missile Jennifer Lawrence takes her handful of scenes by storm.

“The Act of Killing” – A tough but essential documentary

“Blue is the Warmest Color” – An admirably epic love story

“The Hunt” – Sobering, fascinating study of a community in chaos